Born in Mandan, North Dakota in 1911, Steinbrueck and his family moved to Washington in 1913.  He attended Georgetown Elementary, and Cleveland and Franklin High Schools in Seattle, graduating in 1928.  Although Steinbrueck started out at the University of Washington studying fisheries science, he completed a five-year course of study in architecture, graduating in 1935. Two years later, he acquired his architectural license. 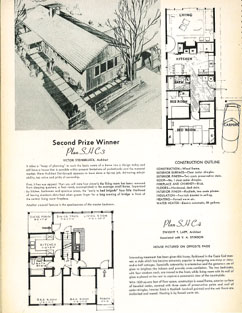 Before opening his own private practice in 1938, Steinbrueck had gained valuable experience in a variety of architectural offices including William J. Bain (1935), J. Lister Holmes, Bjarne Moe (1937-38), and several firms in Los Angeles.  Steinbrueck’s early work focused on small well designed homes.  Many of the designs were published in a variety of architectural magazines and books.  Among his more noteworthy projects was the Alden Mason House (1953) on Boyer Avenue in Seattle, which was featured in McCall’s Book of Modern Homes, and A Treasury of Contemporary Houses.  The home was also a 1952 Seattle AIA Honor Award winner.  Other work includes the Stellwagen House (1955), Steinbrueck House (1952), home at 5411 Ravenna Ave., Barrett House (1956), and home at 626 Randolph Place (1962).

In 1957, Steinbrueck relocated briefly to Michigan to work with former classmate, Minoru Yamasaki, but soon returned to Seattle where he completed designed several more residences.  Upon his return, he joined with fellow architect, Paul Hayden Kirk, to design the University of Washington Faculty Club (1960), which received a Seattle AIA Honor Award in 1960.  Steinbrueck is perhaps best known for completing the original concepts for the Space Needle and designed the Exhibition Pavilion for the 1962 Seattle World's Fair.

A true Renaissance man, Steinbrueck was also an accomplished artist and his works are part of the collections of many galleries around the Pacific Northwest.  Also an author, his influential book, A Guide to Seattle Architecture, 1850–1953, prepared for the National Convention of the American Institute of Architects in June 1953, was the first publication on Seattle architecture.

In 1946, Steinbrueck joined the UW faculty where he taught for thirty years until his retirement in 1976.  His civic involvement focused around saving Pike Place Market from demolition, and developing more public spaces around the Westlake Mall area.