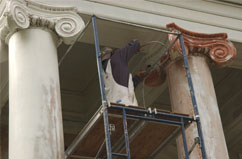 For historic buildings, achieving code compliance is often perceived as one of the most formidable challenges to any rehabilitation project.  It doesn't have to be.  Innovative treatments and technologies, and the increasing adoption of rehabilitation codes present fresh opportunities for building owners, architects, consultants and local officials. New codes, materials and other planning and technical resources can facilitate life safety goals, while accommodating treatments that preserve the character of historic buildings.

In Washington State most jurisdictions use the International Building Code (IBC), and many have also adopted the International Existing Building Code (IEBC).  All jurisdictions must also adopt the Washington State Energy Code (WAC 51-11C). There are many exceptions for historic buildings with the IEBC and the Washington State Energy Code. In addition, a local government may amend or change a code to meet a particular to the local environment and conditions. The jurisdiction may also adopt different codes for mechanical or electrical work, for example. The major code organizations update the codes every three years; however, it may take several years for a municipality to adopt the most recent version.

The intent of all codes is to provide minimum requirements for new and renovated buildings in order to protect the health, safety and welfare of the public.  Fire prevention and life safety remain the primary focus.  The codes are written so the regulations can be consistently and uniformly interpreted.  However in reality, the codes are often interpreted differently depending on the official. When a local building code official is flexible on interpretation of the code, the official or the city is possibly assuming some liability if an accident occurs.  Be advised that building codes are primarily written to govern new construction. Most buildings fall out of compliance with current codes within a few years of construction as new codes are adopted. Building code requirements vary depending on the occupancy or function of the building. Types of occupancy include: residential, assembly, business, educational, mercantile and others. Another factor considered when applying code requirements is the type of construction. The construction classification categorizes a building according to its fire resistance characteristics. Construction materials and elements are assigned fire ratings, usually in terms of hours until structural failure would occur in a fire.

This Chapter will be deleted in future IBC editions in favor of a reference to the International Existing Building Code (IEBC) which includes the provisions in Chapters 4 (Prescriptive Compliance Method) and 14 (Performance Compliance Methods). Furthermore, Chapter 12 of the IEBC (2012) pertains specifically to Historic Buildings (see below).

Historic Buildings. The provisions of this code relating to the construction, repair, alteration, addition, restoration, and movement of structures, and changes of occupancy shall not be mandatory for historic buildings where such buildings are judged by the building official to not constitute a distinct life safety hazard.

ADAAG is not a model code, but is often enforced by local jurisdictions to ensure equal access to all building occupants. There is a section pertaining to Historic Buildings (§4.1.7 Accessible Buildings: Historic Preservation) that offers some alternative paths of satisfying the guidelines. For small multi-story buildings, there are also exclusions for requiring elevators (§206.2.3 Multi-story buildings and facilities) that aren't reserved particularly for historic buildings.

Historic Buildings. Repairs, alterations and additions necessary for the preservation, restoration, rehabilitation or continued use of a building or structure may be made without conformance to all of the requirements of this code when authorized by the building official provided.

The building or structure has been designated by official action of the legally constituted authority of this jurisdiction as having special historical or architectural significance. Any unsafe conditions as described in this code are corrected.  The restored building or structure will be no more hazardous based on life safety, fire safety and sanitation than the existing building.

The UBC also has an entire Uniform Code for Building Conservation, which can be officially adopted or, more often, referenced by the code official.