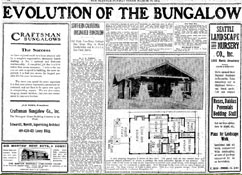 In the teens and 1920s a new housing type, the Bungalow, took America by storm. These small houses, some costing as little as $900, helped many Americans’ fulfill their wishes of owning their own home, equipped with all the latest conveniences.  With the early 20th century population boom and the severe housing shortage that followed for the working class, the Bungalow was the perfect solution to the housing problem.  Central to the Bungalow’s popularity was the idea that simplicity and artistry could harmonize in one affordable house.

Bungalows allowed people of modest means to achieve something they had long sought: respectability. With its special features: style, convenience, simplicity, sound construction, and excellent plumbing, the Bungalow filled more than the need for shelter, it provided fulfillment of the American dream.  The Bungalow was practical, and it symbolized for many the best of the good life.

By 1920 though, the Bungalow craze had reached its peak nationally and was starting to give away to a newer building forms.  In smaller communities, however the type held on for another 10 years well into the late 1920’s and even into the early 1930s in some areas.  By then even the term “bungalow” had become negative to many, implying something “small-townish”.  In a political debate in 1920 outgoing President Woodrow Wilson accused Warren Harding of having “a bungalow mind.” 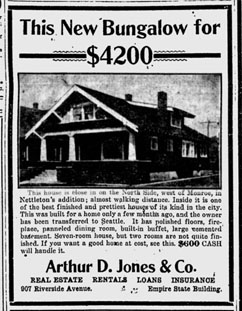 The origins of the bungalow as a housing type are still under debate.  Historians as distinguished as Vincent Scully and Harold Kirker have attributed the invention of the bungalow form to architects Charles and Henry Greene, and claim for them the first bungalow built (1903). Robert Winter in his popular book Bungalow (1980) questions that claim, noting that Greene brothers were only slightly involved in the paternity of the bungalow.

Most dictionaries are explicit when defining the term bungalow as a one- or one-and- a-half story dwelling.  This definition would work except that since the period when most bungalows were constructed (roughly 1880 to 1930 in the United States) literally every type of house has at one time been called a bungalow.  And stylistically they range from Colonial to Mission, to Tudor to Craftsman. Even two-story houses built on the grounds of hotels are still called bungalows.  And to further muddy the definition, the Greene brothers went out of their way to call the Gamble house (1909) in Pasadena, California, a bungalow.  Instead, the Gamble house is a sprawling two-story residence with a third-floor poolroom.  In actuality a “bungalow” really is any small house.  A true bungalow’s distinction might be its low profile.

Promotional literature in the early 20th century almost always noted the chief purpose of the bungalow was, “to place most of the living spaces on one floor.” The one-story plan simplified the building process where utilities could be installed more easily than in a two-story house.  Safety was at a premium because, in the event of fire, windows as well as doors, offered easy escape on a one-story home. 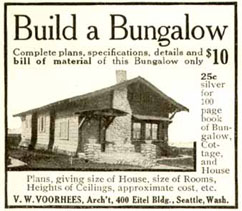 Most historians can agree that the bungalow form has its roots in the Indian province of Bengal. There, the bangla (a common native dwelling) was a one-story dwelling with a thatched roof and open porch. In the eighteenth century the native hut design was adapted by the British, who used the form to build houses for colonial administrators and summer retreats in the Himalayas.  Eventually, this economical, practical type of house invaded North America in the late 19th and early 20th centuries.  As early as 1854 in a lithograph by P.Emmert, the term “bungalow” is labeled for the design of a home for Theodore Shillaker. The actual design however is distinctly a formal Colonial style home.

The first American house which begins to resemble the Bungalow as we know is today, was a home designed in 1879 by William Gibbons Preston. Contrary to the usual definition, it was a two-story house built at Monument Beach on Cape Cod, Massachusetts.  It was probably called a “bungalow” because it resembled resort architecture.  The idea caught on, and from the East the bungalow form spread westward very quickly.  In California (everyone’s mind of the ultimate resort) the form was further refined and reworked, emerging by 1895 into today’s Craftsman Bungalow form.  The first California house dubbed a bungalow was designed by the San Francisco architect, A. Page Brown for J.D. Grant.  The house was a one-and-a-half story residence set on a high foundation and located on a hillside.  It was a strange blend of Bengalese, Queen Anne and Swiss chalet architecture. 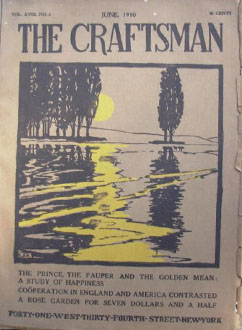 Most people know the bungalow form for its use in the Craftsman style.   The “Craftsman style” Bungalow design was spread rapidly across the country by architects, builders and designers in the early part of the 20th century.  The Craftsman style developed fully out of the work of Gustav Stickley, publisher of The Craftsman magazine (1903-1933), and Henry H. Saylor, author of Bungalows (1911). The Craftsman bungalow craze really took off after the turn of the century, during an era in which Americans were obsessed with the notion of health or simply attracted to economic opportunities in the booming West. Ironically, the bungalow that had once been the symbol of retreat to the countryside, became the architecture of the city and its suburbs.  Yet the bungalow did not lose its identification with the rural idyll and a better, golden day.

Promoters of the Craftsman style billed it as as a reaction to the excessive use of ornamentation by the Victorian style and called for a return to naturalism in architecture and landscape design.  National periodicals such as Sunset, Ladies Home Journal, House Beautiful, and Good Housekeeping assisted in the promotion, publishing plans, elevations and numerous articles.  Sears & Roebuck, Montgomery Wards and many other companies even offered Craftsman style “kit houses”.  Ordered by mail and sent by rail, the mail-order house arrived in two boxcars ready for assembly by the buyer or a hired contractor.  As a result of these tireless efforts, the Craftsman style was the most frequently constructed house type in the country between 1903 and 1930.

The side-gable bungalow is perhaps the most common bungalow sub-type.  This type is characterized by a side facing gable roof where the entrance is on the long facade.  Simple side-gable bungalows can be 1 or 1½ stories tall. Here the porch and entrance are often nestled under the gable roof or as an extension of the gable roof.  Above the porch is usually a dormer, which serves to break up the large expanse of roof that faces the street.  Gable, shed and hip roof dormers can be found.  Many of these dormers allow additional light and egress into 2nd floor living spaces, while some just offer a small amount of light into an attic area.  Dormers can be as large as 12’ feet in length or a short as three feet.

The hipped roof bungalow typically takes the form of a one-story structure, where a hip roof caps a rectangular plan. Often the porch is incorporated within the hip roof or a secondary porch can extend from the main facade.  Hip and gable porch extensions can be found.  These porches can be located in the center or at the left or right sides of the main facade.

The front-facing facing gable bungalow was designed to fit narrow city lots.  Here a large gable roof faces the street and dominates the main facade.  Due to its gable orientation and low pitch, this Bungalow sub-type is typically only one story in height, although 1 ½ story models can be found.  Porches are typically integrated under the main body of the house, and can be full or just a partial width of the façade.  Sometimes, shed, hip and gable roof porches can attached and have separate roof lines from the main part of the structure.

The double-front-gable model is similar to the front-facing gable model except two gables face the street instead of one. The gable roof of the porch is often an extension of the main gable of the house, sharing the same plane, but it can be independent roof form.

Much like the double-front-gable model, the triple-front-gable bungalow boasts its main roof gables pointing towards the street.  Here three separate gables front the street facade.  Some gables often share the same plan of the roof of the main body of the house.