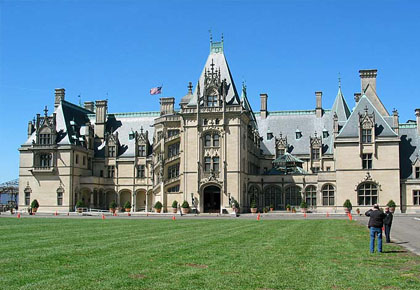 Patterned after the designs of monumental French chateaus of the 16th century, the Chateauesque Style was popularized in the United States by architect Richard Morris Hunt during the 1880s.  The style was grand and gaudy, and literally dripped with European taste, instantly becoming the standard for the mansions of the East Coast’s upper class citizenry. The style eventually became popular for smaller dwellings; however, here in the Pacific Northwest it was mainly utilized on large public and commercial buildings.  Buildings of this style are almost always architect-designed.  They are grand places intended to impress. Despite their French origins, buildings in the style do not attempt to completely emulate a French chateau and incorporate many Gothic and Renaissance detailing. 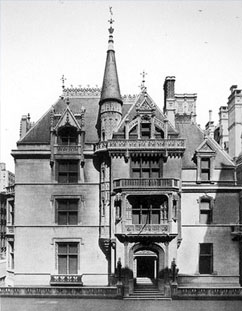 Chateauesque style buildings are easy to identify due to their imposing vertical appearance and characteristic complex roof line with abundant detailing.  Always executed in masonry, Chateauesque style buildings are typically asymmetrical in plan and have a facade composed of advancing and receding planes. Buildings of this style have steeply pitched hipped (and sometimes gabled) roofs, topped by iron cresting or finials.  Many are pierced by decorative gabled wall dormers. Low relief terra-cotta carving may ornament the dormer gables and window and door surrounds.  Chimneys are tall and have decorative corbelled tops.  Round towers topped by a conical roof, are usually present.  Balconies feature Gothic inspired quatrefoil or arched tracery patterns.  Large entry doors are often highlighted by round or gothic arches.

After the turn of the 20th century, some elements of the Chateauesque style were incorporated into new styles of architecture.  Elements such as the steeply pitched hipped roofs can be found in the French Eclectic style from the 1920s and 1930s.  Round conical towers, serving as entry portals, are found in dwellings of the French Normandy style.