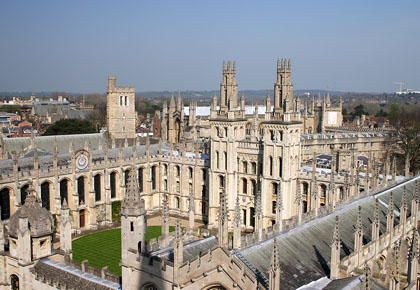 These new larger and more complex school buildings had specialized space designed for cafeterias, gyms and technical training.  Unlike their predecessors, on the inside they were constructed using modern materials such as steel, plaster, clay tile and gypsum board.  While these designs were sometimes rather pared down versions of the more ornate forms of the style with only a few decorative details, like an arched and/or recessed entryways or a few decorative panels, these school buildings are clearly part of the Gothic Revival tradition.  Masonry construction of brick and/or stone lent a sense of permanence and substance to the building, a fitting image for the public education system.

The use of Collegiate Gothic was also a natural choice for an educational institution owned and operated by religious groups.  The architecture imbued not only a grand presence on the landscape but an instant connection to religious roots.

The Collegiate Gothic Revival style can be found throughout the state on numerous university campuses, as well as high schools and even elementary school buildings, both public and private.  Examples include Saint Martin’s College (1913) in Lacey; several buildings at the University of Washington (1916-1939) in Seattle; numerous structures at the University of Puget Sound (1924-1958) in Tacoma; Mount Vernon High School (1922) in Mount Vernon; Central School (1912) in Tacoma; Cheney High School (1929) in Cheney; and Renton High School (1931) in Renton. 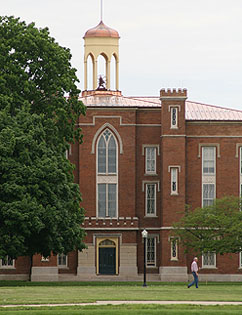 In 1894 the architectural firm of Cope & Stewardson completed Pembroke Hall on the campus of Bryn Mawr College. At Bryn Mawr, Cope & Stewardson combined the original Gothic architecture of Oxford and Cambridge Universities with the American Early Gothic Revival style and the local New England landscape. Commissions quickly followed for buildings on the campuses of the University of Pennsylvania, Princeton University, and Washington University in St. Louis, marking the beginnings of a movement that transformed many college campuses and other educational institutions across the country.

The Collegiate Gothic movement gained further momentum when Charles D. Maginnis designed Gasson Hall at Boston College in 1908. Publication of its design in 1909, and praise from influential American architect Ralph Adams Cram, helped establish Collegiate Gothic as the prevailing architectural style on American university campuses for decades. Other publications followed promoting the style and influencing a new generation of campus construction. One of the more prominent was John Donovan’s 1921 treaty on school architecture (School Architecture), which featured pictorial review of large public schools built during the 1910s, a majority which showcased the Collegiate Gothic style.

Collegiate Gothic buildings are typically rectangular in plan, and frequently have flat rooflines hidden by a stepped or crenelated parapet.  Gothic arched entrances are highlighted by central towers and bay windows, as well as Gothic cast stone tracery.  The exteriors can be of brick or stone, and are highlighted by bas relief decorative panels or plaques.