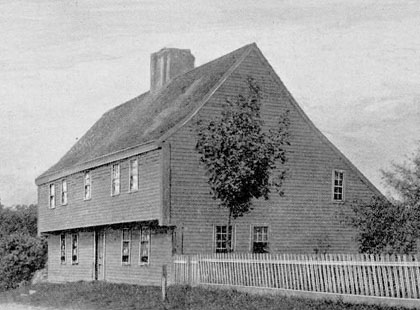 Based loosely on 17th Century New England landmarks such as the Paul Revere House and William Boardman House, the Garrison Revival style gained popularity during the early 1930s when an intense interest in Colonial America swept the nation.  The style was used exclusively in residential applications and can be found in both small and large communities.

The character defining feature of the style is a distinct second story overhang which projects slightly outward from the first floor.  Called a jetty, the overhang is purely decorative in nature but may have originally been utilized in England to provide shelter for street-level market stalls.  Other stories persist that the style was derived from Colonial era wooden blockhouses which were designed to enable the occupants to better resist assaults.  Most jetty’s have decorative turned wood "pendants" evenly spaced across the main facade.  The length of the jetty can vary from a few inches to a couple of feet. 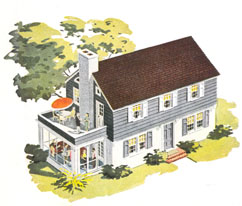 The main volume of the dwelling is side gabled, many of which are broken by the addition of gabled wall dormers. Eaves are shallow with little to no overhang on the gable ends.  Unlike their prototypes, many examples have first story box, bow, or bay windows.  Sometimes these are highlighted by decorative cut cornice moldings.  Most Garrison Revival style homes have multi-pane double hung windows some highlighted by decorative shutters.  Small octagon windows can also be commonly found.

Many examples have masonry-veneered first stories highlighted by second stories of wood clapboards.  Small one story side gabled wings that housed either a garage or family room are also common.  Often Georgian or Adam-inspired doorway surrounds and multi-paneled doors add decoration to the otherwise plain facades.

While the style persisted well into the mid 1950s, it quickly lost favor to the ranch house.  However examples can be found as late the 1970s.  The traditional Garrison jetty can also be found on many split level and split entry homes, but they usually lack the decorative pendants.