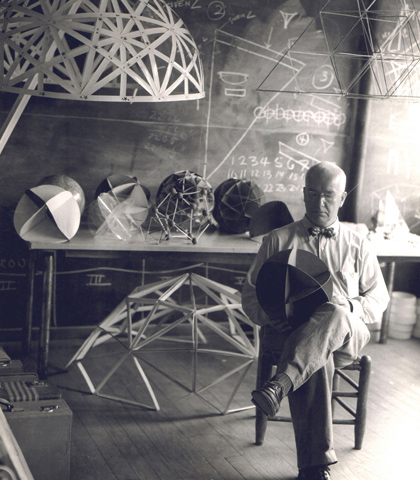 Originally invented in Germany in 1922, Geodesic Domes did not see widespread use until the mid 1970s when prefabricated kits enticed a generation of do-it-yourselfers. Companies such as Cathedralite Domes, Dome Works, Pacific Domes and Oregon Domes, provided many of the kits for structures here in the Pacific Northwest. Geodesic Domes are often identified with the counterculture of the 1960s and 1970s, and became popularized after inventor, architect, engineer, and mathematician R. Buckminster Fuller, lectured world-wide on the potential use and efficiency of the structure.  Fuller had received an American patent for the design in 1954 and came to the State several times to lecture on the subject.  Locations included Inglemoor High School in Bothell (1970), the University of Washington (1972), Spokane (1973), the First Congregational Church in Tacoma (1979), and at Shoreline Community College (1980).  Widely published pattern books such as Domebook I (1969) and Domebook II (1971), as well as hands-on workshops, allowed amateur builders to construct Geodesic Domes at their own leisure.  Carpenter Jim Anderson lead a dome building technique rural skills workshop for residents of King County in 1975.  Such activities led the dome to become identified with alternative lifestyles. 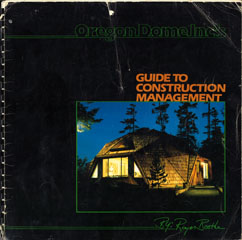 Here in the PNW the first Geodesic Dome arrived at the grounds of the Seattle World's Fair in the form of the Ford Motor Company Pavilion in 1962.  After the fair was over the dome was moved to the waterfront in Edmonds and became a boat and marina showroom.  The first residential domes however did not begin begin to appear until the 1970s.  Reportedly King County approved the first geodesic dome through their building department in 1973 (Bondelid House, Bothell), while the first commercial-office geodesic dome, an office for Cathedralite Domes, was built in Pierce County in 1978.  The Pierce County dome, located near the Tacoma Mall, is 45ft in diameter and was one of the first authorized dealerships for Cathedralite Domes in the state. 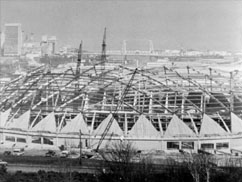 The basic spherical shape of a Geodesic Dome is derived from a complex engineering system of triangular frames, often called “space frames”.  The frames are made by joining triangular-shaped panels in such a way as to form a dome-shaped building in which all planes or facets, are straight, flat surfaces.  The frames, usually made of wood or tubular metal, create a self-reinforcing roof and siding unit all in one structure.  This eliminates the need for any internal supports or “load-bearing” walls.  The Tacoma Dome, at 530’ in diameter, is the largest public Geodesic Dome in the world.

Geodesic Dome frames can be clad in a variety of materials from asphalt to cedar shingles on smaller buildings, to metal or plastic sheets on large exhibit or recreational facilities. Skylights were often installed, and can be found on any surface as long as they are within the basic triangular frame.  Dormers, copulas, and flat-roofed, or Gambrel-roofed wings can be also found.

Geodesic Domes have been used for just about every building type from playground equipment to military radar stations, to civic and recreation buildings, exhibition attractions, and single family homes.  While thousands have been built and are still being manufactured today, the use of Geodesic Domes achieved only limited popularity.  Most were built in isolation as single structures.