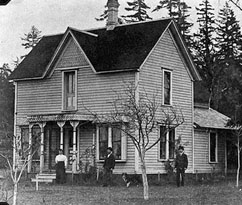 One of the earliest house types found in Washington State is the I-House. The term "I-House" was coined by cultural geographer Fred Kniffen, who identified and analyzed the type in his 1936 study of Louisiana house types. He referred to it as the "I" because of its common occurrence in Indiana, Illinois, and Iowa, all states beginning with the capital "I." Kniffen explained that usage of the new term did not imply that this house type originated in, or was restricted to, those three states.

The I-House evolved from the English, one-room house with an end chimney.  The addition of a second story onto the basic floor plan of the hall-and-parlor house reflected the growing prosperity of an agrarian economy.  It is little wonder that the I-House is the predominant housing type in rural areas across the country.

Despite the diversity of floor plans utilized in the I-House, its basic form is constant.  The house is two story, one room deep and at least two rooms wide with a side facing gable roof.  Typically the façade is symmetrical with a central entry in a three or five bay configuration.  While individual measurements can vary somewhat, the dimensions of the I-House conform to a particular standard.  The average size may be taken as sixteen to twenty-four feet deep by twenty-four to forty-eight feet wide by twenty to twenty-four feet tall. 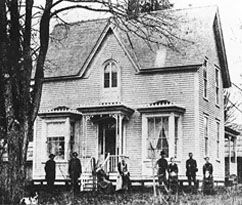 Other than these characteristics the I-House took a variety of forms from region to region. Construction materials range from brick and stone or log, but the overwhelming number are constructed of timber frame, surfaced with horizontal clapboards. Placement of chimneys varied as well.  They may be inside end, outside end, and/or either single or paired on the center of the roof ridge. Demands for additional space necessitated the building of ells or wings at the rear of the house as well as the addition of small and larges covered porches at on the main facade.

Decorative elements representing a diversity of architectural styles could be freely applied to the house.  They range from the simple to the highly ornate, including Greek Revival, Italianate, and Gothic Revival style embellishments. These reactions to popular architectural styles bridged the gap between the rural, folk-derived building types and the academic, architect designed structures of the country’s urban areas. 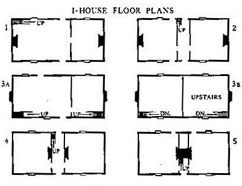 Most scholars agree that the I-House was more common in a rural setting, but it can be found in urban settings. In regard to social structure the I-House became a symbol of economic attainment in an agriculture-based society and was generally regarded as a move up the housing hierarchy. Some contend that it represented the fine houses built by the rural, upper-class farmer; hence, the "Farmer's Mansion" appellation was an appropriate description. The majority of I-Houses in Washington were constructed between 1870 and 1910 however examples can be found in period kit house and plan books as late as 1915.