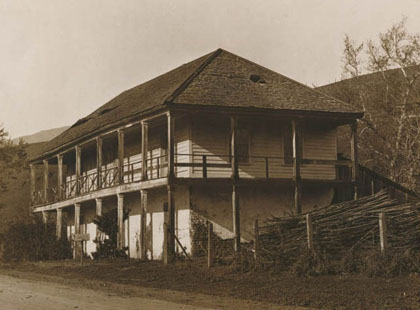 In the early part of the 18th Century, Californians sought to define an indigenous style of architecture by fusing local Spanish-influences with Colonial designs from the east coast.  Their search eventually led to the emergence of one of California's few native architectural styles. A modified version of the Monterey Style became popular between 1930-1950.  Some early literature refers to the style as Mediterranean, but today most historians call the designs Monterey, named after the California city where the style is most prevalent.   The Monterey Style makes a subtle and brief appearance in the Pacific Northwest mainly in the 1930s and 1940s. 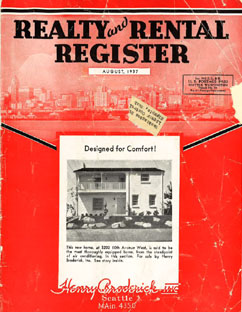 wall surfaces can be finished in brick, stucco or clapboard reflecting the fusion of Anglo and Hispanic styles. Windows are often narrow and tall and are grouped in pairs.  Many Monterey Style homes have attached front facing garages, which indicate the growing importance of the automobile during the mid part of the 20th century.

The inset balcony, usually located at one end of the house above the main entrance door, is accessed only from the interior by glazed doors.  Many have ornate balusters juxtaposed against simple squared wood posts.  The balcony and a side facing gable roof gives the home a dominant rectilinear character.