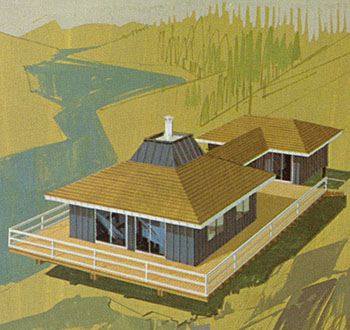 Some historians suggest that the Pavilion form was derived from the Japanese irimoyaroof form, which was utilitized on Buddhist temple structures beginning in the 7th Century.  Others suggest the style has more of a Polynesian background with some early articles referring to the style as “Pacifica.” The Pavilion form of today however gained popularity when Wichita, Kansas architect Richard Burke developed a modified version of the roof form for the Pizza Hut chain in 1964.  Later the McDonald’s corporation, utilized the form when they opened a new proto-type sit-down restaurant, which featured a “double mansard” style roof, in Matteson, Illinois, in 1968-69.  Quickly the form proliferated across the country, perhaps because it was a distinctive shape that set buildings apart from the existing built environment.  By the mid 1960s the form was used for a variety of types structures ranging from World’s Fair visitors centers and banks, to dwellings and religious buildings, to small and large commercial structures.

While the Pavilion form can be found mainly on small scale commercial buildings, some architects used the form to break up the mass of larger buildings such as educational facilities and office complexes.  The ensuing look is that of a “cluster” development of smaller scale buildings, typically placed among a natural landscape.  Some residential examples can be found, although they are rare. 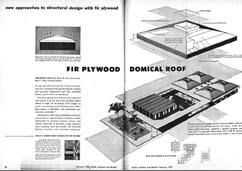 The defining characteristic of the Pavilion form is its distinctive roof shape which utilizes two roof forms stacked upon each other.  The lower roof, always has a shallow hip form.  The upper roof can utilize a steep hip, gable or mansard form.  The resulting silhouette is a structure with a hipped roof and a box-like crown.  For small-scale commercial buildings, the steep sloping crown could easily support an area for a large advertising sign.  Utilized on larger buildings with a mansard style crown, the area offered a convenient space to hide mechanical equipment.  Smaller structures may have utilized a central skylight or chimney flue in the upper roof.  Pavilion structures often have floor to ceiling windows, wide over-hanging boxed or open eaves and sliding glass doors.  They can be clad in a variety of materials ranging from brick, clapboard, T-1-11, stone and/or stucco.  Some stylistic details can be applied to the form which give the building an Asian flare, or even a Populuxe/Googie or Wrightian vibe.