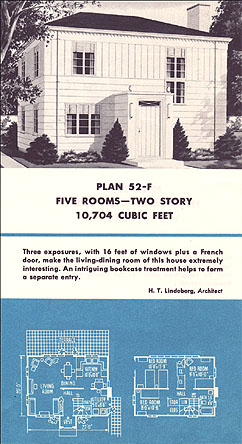 Named after King George IV, who was appointed to serve as a Regent of England from 1811 to 1820, the Regency Revival style, sometimes called “Modern Georgian” was used exclusively in residential applications and can be found in limited numbers across the Pacific Northwest.  The style was developed from the architectural precedents of Georgian style, and was popular in the mid-to-late 1930s, although post WWII examples can be found.

Key character defining features of the style include its two story box-shaped mass, which is highlighted by a low pitched hip roof with a shallow or no eave overhang.   The depth of the overhanging is usually limited to a gutter and in some examples is eliminated altogether by a low parapet wall.   Decorative details at the eave line often consist of a small frieze board containing saw-cut scroll work or dentils.

The overall look of the home is noted for its refinement of detail, a greater restraint, and delicacy in design in comparison with its Georgian style derivative.  Exterior sheathing examples range from brick and clapboard, to smooth ship-lap siding.  Frequently the two story mass of the building is delineated by the use of different cladding types on the first and second stories.  Small one story gable, hip or flat roof additions are often found attached to the main facade. 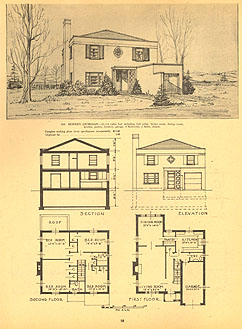 Windows range from traditional six-over-six double hung wood sash units to metal casement and are typically arranged symmetrically.  Often round or octagon windows are found centered on the main façade at the second floor level.  At the entry, Georgian or Adam-inspired doorway surrounds and multi-paneled doors add decoration to the otherwise plain facades.

Many Regency Revival style dwellings have Art Deco and/or International Style detailing in terms of window and door types, moldings, and interior finishes. Delicate tracery of ironwork for railings and porch columns can also be found.