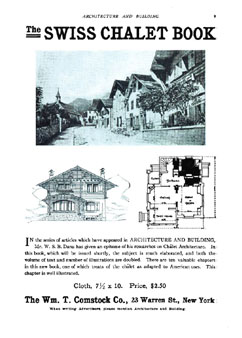 While architect A.J. Downing introduced the Swiss Chalet style to America in his 1850 stylebook, The Architecture of County Houses, a resurgence of the style came about during the Arts & Crafts era of the early twentieth century.  This renewed interest was spurred on by the publication of a variety of books and articles which provided architects as well as homeowners, inspiration and specific details on how to replicate the architecture of the Swiss Alps.  Such books included the work of William S.B. Dana’s The Swiss Chalet Book (1913), and Henry Saylor’s Architectural Styles for County Houses: The Swiss Chalet Type (1912).

The style, mainly applied to residential designs, was really an adaptation of traditional versions.  Where the Swiss models utilized heavy timber and log construction, resting on stone bases; American models utilized simple platform construction in combination with applied decorative elements.  Swiss Chalet dwellings are typically two-and-a-half stories high and have a square or rectangular plan.  Low pitched front-facing gable roofs are common and have extra deep eaves supported by large decorative brackets or knee braces.  The ends of rafters and/or purlins are generally exposed and are sometimes carved.  Often, further definition of the large comforting roof is given by intricate cut bargeboards and a clipped gable.

Despite their heavy appearance, multi-pane, grouped casement style windows allow plenty of light into interior spaces. Most designs have second floor balconies which are highlighted by flat balusters with decorative cut-outs or round stickwork.  First and second floors are often differentiated by a change in cladding.  Horizontal and vertical laid shiplap, board-and-batten, and shingle siding can be found.  Some examples have faux post-and-beam construction elements and first floors of stucco. Often the entire front of the chalet will be encrusted with jig-sawn fret, grill and scroll work. Some incorporate religious or family mottos, or family shields.

Based on period literature, the revival of the style was popular from 1900 to 1925.  Here in the Pacific Northwest several good examples can be found, but they are rare.