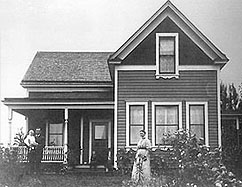 The  “Upright-and-Wing” (sometimes referred to as Temple & Wing or Gable Front & Wing) was initially developed for the rural settings, however it enjoyed wide usage in both rural and urban settings. It consists of a one-and-a-half to two-story  wing with a front-facing gable roof,  and a side wing set at a right angle to it (sometimes known as the kitchen wing or ell).  Such wing can be one-and-a-half to one-story tall, with a side-facing gable.

As a type of non-stylistic folk architecture, Upright-and-Wing houses were generally designed and built by tradesmen as opposed to the owners of the house.  Upright and Wing houses were laid out in either an L-plan or T-plan. The ell usually has bedrooms and the kitchen while the wing holds a parlor, staircase, and additional bedrooms. Early East Coast examples (c.1830–50) have the main entry on the upright portion of the house. Post-1850 examples, such as those found in the Pacific Northwest usually shifted the entryway to the ell portion of the house under a covered porch. 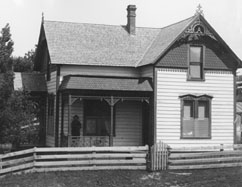 The Upright-and-Wing enjoyed a lengthy and nationwide period of popularity.  No systematic survey of Upright-and-Wing houses in Washington State has been conducted, however numerous examples are known to exist throughout the State in a variety of locations.

The building type partially coincided with the popularity of Greek Revival architecture in the United States and thus, many Upright-and-Wing houses are adorned with pilasters, cornice returns and wide entablatures.   Due to their late construction date, many examples here in the Pacific Northwest boast Queen Anne and/or Italianate style detailing such as bay windows, decorative bargeboards and cut cedar shingle siding in the gable ends.