Nifty From The Last 50 Initiative

One of the most effective mass marketing home campaigns of all time was the “Live Better Electrically” (LBE) program of the post-World War II era. It began in the mid 1950s when the General Electric (GE) and Westinghouse corporations decided to co-sponsor a multi-million dollar nationwide campaign to promote the sales of electric appliances and to tout the benefits of electric power.  General Electric provided the main support for the program, which launched in March of 1956. 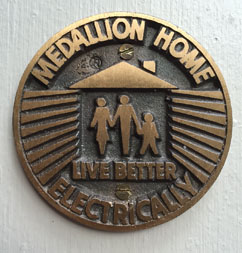 At the time, utility companies were rushing to meet the increased demand for electricity in postwar America.  However, as more power plants came on line the cost of electricity decreased.  To increase company profits, homeowners were encouraged to consume more power through the purchase of a variety of electric products. For GE and Westinghouse, the creation of a new market for electric heat also promised to increase company profits.  Additionally, the two corporations not only sold residential electric heating units and a variety of household appliances, but they also sold electrical generating equipment to  utility companies nationwide.

Supported nationwide by 900+ electric utilities and 180 electricity manufacturers, the electricity industry launched the LBE campaign through a variety of media outlets. The initial launch came with the offer to send a free 70+ page brochure to homeowners which told them how their lives could be enriched by the use of electricity and purchase of electric appliances.

To further the new program, in October 1957 the National Electrical Manufacturers Association launched the "Medallion Homes" campaign, which sought to sell initially  20,000 all-electric homes nationwide within a year.  The program had five basic goals:  1) to provide prospective homebuyers with a recognized symbol of electrical excellence for new home construction 2) to raise the electrical standards in new construction 3) to help builders sell homes by educating their customers to the benefits of electrical living 4) to show existing homeowners electrical features and fixtures that were needed in their present homes 5) to give national support to existing programs that were being sponsored by local utilities to upgrade existing home electrification.

The LBE initiative and Medallion Homes program were heavily promoted through a variety of magazine and newspaper ads, as well as TV spots, and even radio jingles. The main campaign spokesman was then-actor Ronald Reagan, the host of "General Electric Theater."  As part of the show, Regan took television audiences on a tour of his own Pacific Palisades home, as well as a variety of GE Research facilities and manufacturing plants.  Guest speakers included television and radio comedian, personality, and singer Fran Allison (for Whirlpool), and actress, consumer advocate, and current affairs commentator, Betty Furness (for Westinghouse). 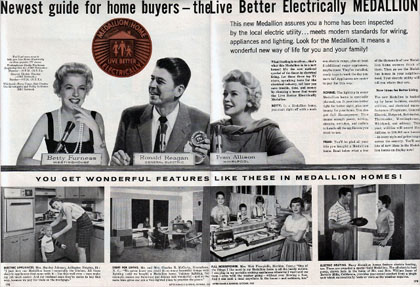 To earn a LBE Medallion emblem a house had to be solely sourced with electricity for heat, light, and power. The house also had to have an electric range or built-in oven and surface units, and an electric refrigerator and/or refrigerator/freezer in the kitchen.  Other requirements were an electric water heater, plus at least one more major electric appliance selected by the builder or buyer from an approved list.  An optional appliance might be a dishwasher, food waste disposer, clothes dryer or even an air conditioner. Full 150 ampere service was also required, with a specified number of outlets and switches per linear foot of wall space. And finally, to meet the requirement of “modern living,” Medallion Homes had high standard for built-in illumination throughout the house, initially an unusual feature within new home construction.

The homes that met LBE standards could be marked with a 3” inch brass plaque emblazed with the “Live Better Electrically” logo. The brass plaque was typically found near the front entry door and could be embedded in the concrete sidewalk, patio or doorstep, or affixed to the wall as a stand-alone marker.  Some plaques were incorporated into a doorbell or knocker.  For those who wanted a less permanent marker, a 6” inch decal could be affixed to a window. 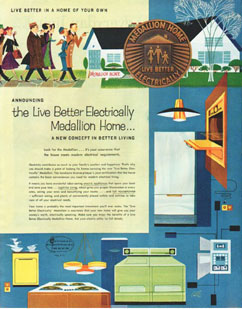 The title of the campaign changed slightly over the years, but the Live Better Electrically logo remained a constant. Variations included:

Across the county and here in Washington state, hundreds of developers and builders jumped on the LBE bandwagon.  The Medallion Home badge was a prominent feature of local Parade of Homes programs for numerous years. Entire neighborhoods such as the Somerset development in Bellevue (1961), were planned and built as Medallion Homes. With inexpensive power in the Pacific Northwest, GE and Westinghouse’s goal for increasing electrical standards in home construction was easily met.  For example, in 1958 Seattle City Light proclaimed that 99.4% of all of Seattle’s new single-family homes were all-electric. 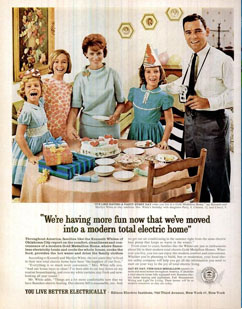 The LBE campaign positioned natural gas, the biggest power source of the time, as an outmoded method to operate appliances like furnaces, cooking ranges, water heaters, and clothes dryers.  Living in a Medallion home was marketed as the apex of modern living.  To heighten their modern, futuristic feel, many all-electric homes also had unusual electrical amenities such as electric curtain rods and baseboard heating, or even such unusual items as task lighting under a woman’s dressing table for pedicures.

By all accounts the Medallion Home campaign was a huge success. Some estimates note that the nationwide goal of about 1 million all-electric homes was achieved, although specific data on the actual number built is unknown. The program was still marketed heavily through the early 1970s and remained a selling point for real estate agents for another ten plus years. In Seattle, for example, dwellings were still being advertised as a Medallion Home as late as 1983.