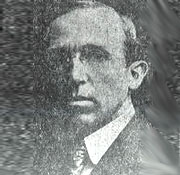 Abraham Horace Albertson (1872-1964) was one of Seattle’s most prolific architects.  He was born in Hope, New Jersey on April 14, 1872.  With the assistance of a scholarship he graduated from Columbia University in 1895 and then practiced architecture in New York City; initially as a draftsman with the firm of Clinton & Russell.  Albertson moved to Duluth in 1905 and then came to Seattle in 1907 as the representative of the New York architectural firm Howell & Stokes, who had been hired by the Metropolitan Building Company to prepare a plan for the development of the University of Washington’s Metropolitan Tract.  Albertson served as the Seattle representative for Howells & Stokes from 1907 to 1917 and oversaw the firms work in Seattle and other west coast cities.

Albertson’s associates during this time included Joseph Wilson and Paul Richardson.  Joseph Wade Wilson (1878-1968) joined Alberston in 1907 after coming to the Pacific Northwest to look for his brother, a timber cruiser, who had disappeared.  Wilson was born in Morristown, IL and was educated at the University of Illinois receiving a BA in Engineering (1903) and a Master’s in Architecture the following year.  Paul David Richardson (1888-1939) was born in Smithberg, Maryland but grew up in Seattle.  After a brief architectural apprenticeship, he joined Albertson in 1910.

By 1919, Albertson had opened up his own firm A.H. Alberston & Associates and Wilson and Richardson remained with him.  Together they completed most of the remaining Metropolitan Tract buildings including the White & Stuart Building (1923), the Arena Building (1925), and the Stimson Building (1925).  Their eclectic training produced a variety of work in a mix of architectural styles, including the Spanish Revival style Cornish School (1921); the Art Deco Municipal Building (1930) for the City of Everett; and several Collegiate Gothic structures for the University of Washington.

By 1924, Wilson and Richardson were finally receiving billing as Alberston’s “Associates” on all the firm drawings as well as in the credits accompanying the firms published works.  They officially became partners of the firm in 1935 and the name was changed to Albertson, Wilson & Richardson.

Unfortunately, there was very little work during the late 1930s.  Richardson died suddenly in 1939, and Albertson and Wilson joined the state office of the Federal Housing Administration (FHA).  Albertson retired as chief architect for the FHA in 1949 and passed away in 1964.  Wilson retire from the FHA about the same time, but continued to work for local architect John Maloney and then for the Boeing Company.  He passed away on April 18, 1964.