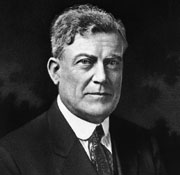 Albert Sutton was born in Victoria, British Columbia, on June 6, 1867, but grew up in Portland, Oregon.  After attending Portland’s public school system, he studied for two years at the University of California. After his time in Berkeley, he became a draftsman for the Southern Pacific Railroad for three years, working on bridges and buildings associated with the railroad. Sutton moved to Tacoma in 1888 during the city’s early boom years and formed a partnership with James Pickles.  Together, they designed several commercial buildings in Tacoma including the Sprague Block (1888); the Sprague Building (1980); the U.S. Post Office (1889); the Abbot Building (1889); the Uhlman Block (1889); the Baker Building (1889); the Wolf Building (1889); the Joy Block (1882); the Berlin Building (1892); the Dougan Block (1890); and the Holmes & Ball Furniture Co. (1890).   Outside of the city they designed the Wilson Hotel (1890) in Anacortes.  The size of their buildings may vary a little in scale and bulk but they all follow a similar aesthetic and observe design elements from the Romanesque Revival style which was in vogue at the time. For reasons unknown, the practice dissolved in 1893.

Sutton then formed a short-lived partnership with Ambrose J. Russell from 1893-1895. After his partnership with Russell ended, he moved to San Francisco where he worked mostly with Charles Peter Weeks. The firm of Sutton & Weeks was established around 1901 and lasted until 1910.  After this venture, Sutton moved back to the Northwest and opened a practice in Hood River, Oregon.  He also operated a ranch outside of town.  In 1912, he formed a partnership with Harrison A. Whitney of Portland, but maintained his residence in Hood River until 1916 when he returned to Portland.  In 1918, Sutton returned to Tacoma to establish a Tacoma office of Sutton & Whitney with Earl A. Dugan as associate.  As a prominent member of the architectural community, Sutton was a member of the American Institute of Architects (AIA) as well as a Mason.  He suffered a sudden heart attack in Tacoma on November 18, 1923, and died at the age of 56.

During this later phase of his career, the firm of Sutton & Whitney designed some of Tacoma’s most prominent buildings. Projects include the National Bank of Tacoma Building (1921), the  W.R. Rust Building (1920), Scottish Rite Cathedral (1921), Annie Wright Seminary (1924), campus of the College of Puget Sound (1923-1924; renamed University of Puget Sound in 1960), and numerous residences.  A comprehensive architectural survey of all dwellings, institutional buildings and business blocks was conducted in 1927 by a committee of prominent Washington State architects for the state chapter of the American Institute of Architects. The survey was the first of its kind attempted in Tacoma. The committee presented awards to exceptional projects. Sutton & Whitney, as the architects of many of the chosen projects, received the more awards than other Tacoma firms.

The highest Honor Award was given to the National Bank of Tacoma for combining “a simple, direct, well-thought out plan with a well-proportioned and dignified exterior expressed in lasting materials and carefully studied and skillfully executed in every detail.”  The College of Puget Sound and Annie Wright Seminary also received Honor Awards. The committee was quoted in the Tacoma News Tribune that the two “are very good examples of Tudor collegiate architecture. It is refreshing to note the restraint observed in the design of these dignified groups of buildings. The beauty of these designs depends largely in the composition of the masses, the scale and grouping of the windows rather than in the elaboration of meaningless detail.”   All together, Sutton and Whitney received eleven awards from the committee for work ranging from commercial buildings to residences and schools.