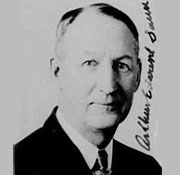 Born in England on April 14, 1860, Spokane architect Arthur Edward Saunders reportedly apprenticed in the building trades before immigrating to the United States in 1885.  He had also taken a course in the “science of construction” at the art school in South Kensington.  At the age of 25, seeking new adventures, Saunders moved to California and formed an architectural practice with Daniel A. Damkroeger in Santa Cruz. Together they design a high school in Soquel (1889), a suburb of Santa Cruz; and the Visalia Railroad Company Depot (1893) and High School (1896) in Visalia. While the partnership lasted for a few short year, Saunders remained in California for tweleve years. While there he me a married California native Carrie Gould in 1896. Together they had one son, Arthur G.

In 1897, for reasons unknown, the family moved to Spokane, where Saunders opened his own independent architectural practice.  His arrival proceeded the Great Fire of 1889 which put him in a good position to receive a number of commissions. Local newspapers claimed he was responsible for many of the cities splendid structures and they were “monuments to his skill, taste, and ability.”  They noted that he was “one of the ablest men in our town, [engaged in] the greatest and most enduring of the arts.”

While some publications note that he designed about 30 homes in Spokane, the exact locations of these dwellings are unknown at this time.  Known projects include the Florence Crittenton Home for Unwed Mothers (1903); a rental house for C.J. Fauling (1901, w 5th Ave. & s Oak St.); the A.A. Barnett House (1904), 902 w Augusta); the Wilson Apartments (S. 309 Wall, Spokane); and the Lincoln Hotel (1902), the Harrington State Bank (1901), and a store for A.C. Billings all in Harrington. At least one of his designs was featured in Keith Magazine on home Building (Jan 1910).

Saunders and the family left Spokane and moved to Boulder, Colorado in 1904.  Shortly thereafter he formed a partnership with Charles H. Wright.  However by 1907 they had parted ways and Saunders continued with an independent practice.  Over the next 20+ years Saunders made a significant impact on the community of Boulder designing a variety of buildings in multiple architectural styles.  Notable projects include the Grill Mansion (1905); the Christian Church (c.1915); and the Randall-Hickman House (1918).

After his first wife, Carrie, passed away, Saunders remarried in 1917 at the age of 56.  His second wife, Alda Ann Barnes (27 years his junior) was also a widower and had a young 10-year old daughter, Katie Mae.

Polk Directories indicated that Saunders continued to practice until death on October 29, 1930. He is buried at the Green Mountain Cemetery in Boulder.  His son, Arthur Gould Saunders, was longtime draftsman in a variety of architectural firms but never became a licensed architect.