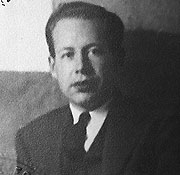 Born on July 11, 1910 in Washington D.C., Bert Atherton Tucker was raised in Seattle and graduated from the University of Washington with a Bachelor of Arts degree in English (1931), and Bachelor’s degree in Architecture (1940).

While still attending school, Tucker worked as a draftsman for architect J.M. Taylor Jr.  Upon graduation, he moved to Bremerton and began working for Barry & Kenneth Branch, the largest architectural firm on the Kitsap peninsula.

At the age of 35, in 1946, Tucker established a practice with fellow University of Washington graduates Robert Shields and Roland Terry.  The talented young firm focused primarily on residential designs for a cross-section of clients from professionals to Seattle’s budding creative class.  Among the firm’s most notable projects during this early period is the W.E. Warren House (1949), the Zoe Dusanne House (1949), the Mayer House (1950), the Burnett Brothers Jewelers Store (1951), and Canlis Restaurant (1951)—all located in Seattle. The Bud Burnett House (1949) in the Broadmoor area, built on stilts into a hillside, was so forward thinking that it continued to be featured as an example of good design in many architectural magazines some 15 years after it was built, and brought the firm many new commissions.

After Terry left the partnership to establish his own firm in 1951, Tucker & Shields continued their collaboration until 1962.  Still focusing primarily on residential designs, many of their homes were featured in national home building and design magazines such as Sunset and Popular Homes.

Many of the firm’s projects can be found in Seattle and on the east side communities of Lake Washington.  The most notable examples include the Moffett House (1954) in Seattle, the Brown House (1961) in Bellevue, the Denman House (1957) in the Hilltop neighborhood, the Rind House (1961) and the Hayter House in Issaquah (1956).

Tucker passed away in Seattle in October of 1983.