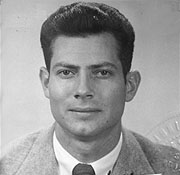 Born and raised in Spokane, Bruce Morris Walker, began his formal architectural training at the University of Washington in 1941.  However, before completing school, he was drafted into the Navy during WWII and was sent to Midshipmen school.  After being released from active duty in 1947, he completed his education and received his Bachelor’s degree in Architecture in June of that year.  During school, Walker gained valuable experience by working for architect Bliss Moore in Seattle.  Then upon graduation he returned home and went to work for a short time for architect E.J. Peterson and then for the firm of McClure & Adkison.

A gifted student, Walker continued his architectural education in Boston, and graduated with a Master’s degree from the Harvard School of Design in 1951.  During school he worked for firm Glazer & Gray in Boston, and for the Architects Collaborative.  While in graduate school he won several national design competitions including first prize in a joint NAHB and Architectural Forum small house competition.

After traveling and studying in Europe on the Appleton Traveling Fellowship, Walker returned to Spokane and opened his own practice in 1952.  In 1953 he formed a lasting partnership with John W. McGough.    In the late 1950s, William "Bill" Trogdon" joined the partnership.  Together the firm pushed the architectural envelope in the Inland Northwest and created many award winning projects over the next 30+ years.

With business thriving, the firm opened a Seattle branch office in 1963 with 12 employees.  Projects on the west side of Cascades included the World of Commerce and Industry Building (1962) at the Seattle World’s Fair; Kane Hall (1971) and the Plant Services building (1963) at the U of W; the Communications Laboratory (1977) at the Evergreen State College; and Padelford Hall (1966) at the U of W which received a Seattle AIA merit award.

In 1966 Walter Foltz and Robert Nixon (later replaced by Jack Lyerla) became partners in the growing firm, which by the end of the year had reached 30 full time employees.  In the early years of the firm, James Jacobs headed the Interior Design Department and Donald McKinley, served as their chief spec writer.

Functioning as a full scale architectural/engineering firm, throughout the 70's and the 80's the firm specialized in the planning and design of justice facilities.  Projects by the firm can be found throughout the United States.  Notable achievements by the firm for this building type include developing the industry standard for ballistics resistance glass which is still in use today.  In 1988 the firm evolved from a partnership to a professional services corporation and expanded its ownership.  In 1990 the last of the founding partners retired and today the firm is known as Integrus Architecture.

Later in life, Walker served as an adjunct architectural facility member at the WSU campus in Spokane.  Honoring his long term impact on the built environment in the Pacific Northwest, in March 1999, the Spokane Interdisciplinary Design Institute held a retrospective exhibit of his work.  Walker passed away in Spokane in April 2005 at the age of 81.

"Four Officiers Are Elected by Temple", The Spokesman Review - April 6, 1966.

A Selection of Contemporary Architecture in Spokane, Washington - AIA - 1967

"House in Spokane.. An Entry Garden, A Family Garden, a Children's Garden", Sunset- May1961.