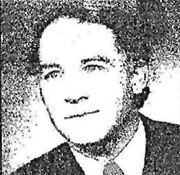 Architect Donald Edward Neraas was born on born June 16, 1931 in Spokane.  While attending Lewis & Clark High School in Spokane, he began his architectural career at the young age 16, working part-time in the architectural office  of Whitehouse & Price, one of Spokane's larger firms.  After receiving his bachelor's degree in architecture from the University of Oregon in 1953, Neraas returned to Spokane and interned with Whitehouse & Price for a short time.  Upon acquiring his architectural licsene (#1020 - Oct 22, 1957) he opened his own independent practice in Spokane in 1957 and began a long career of designing projects in the city and the surrounding communities.  According to his family, Neraas had a special interest in the design of churches, and traveled extensively to places such as Tanzania, Nigeria, Egypt, China, Ireland, Canada, and Israel for his church work.

Neraas was active in a vareity of civic, social and proffessional organizations.  He served on the boards of more than 30 local organizations, including the Spokane Chamber of Commerce, the Kiwanis, Goodwill Industries, Trinity Lutheran College, the Westerners, and the Spokane Racquet Club.  He passed away in Spokane on December 15, 2007 at the age of 76.