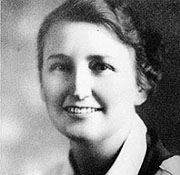 Born in 1897, Elizabeth Ayer grew up on a farm in Olympia, Washington. Her interest in mathematics and art led her to pursue architecture at the University of Washington. She was the fourth student and the first woman to graduate from the university’s new architecture program, graduating in 1921.  While Ayer’s career is mainly tied with architect Edwin J. Ivey, she also worked for Andrew Willetzen in Seattle, for the architectural firm of Cross & Cross and for Grosvenor Atterbury in New York. She was interested in European architecture and twice during the 1920s spent a year abroad to tour and study.

In 1927, Ayer began to collaborate with Ivey on a number of high profile commissions for Seattle’s social elite.  The design for these homes was traditional, predominantly Colonial in style. Such design tendencies marked Ayer’s projects throughout her career.

In 1930, Ayer became the first woman to be licensed as an architect in the state.  After Ivey’s sudden death in 1940, Ayer formed a partnership with fellow University of Washington graduates Rolland Lamping, Ralf Decker, Waldo Christenson and Harry Broman.  Under the name Decker & Christenson and Ayer, Broman & Lamping Associated Architects, the firm completed a variety of projects from small homes and churches to large commercial and military structures.  As the senior partner in the firm, Ayer maintained her trademark period revival facades.  However, rear elevations and the interior spaces of her projects had a recognizable modernist flavor and often featured expanses of glass, modern materials and open floor plans.  Notable projects include the Davis House (1950) on Mercer Island; the Douds House (1951), which was featured in the book, Practical Houses for Contemporary Living; the Linden House (1962) on Bainbridge Island; and the Forland House (1963) in Seattle.

In 1970, Ayer retired after nearly half a century of architectural practice.  In 1980, the Seattle Chapter of the AIA Senior Council honored her for her dedicated service as a pioneering female architect.  Ayer died in Lacey in 1987.