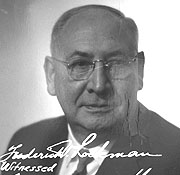 While architect Frederick Vincent Lockman was born in Milwaukee, Wisconsin (September 13, 1896) he grew up in Seattle, graduating from Lincoln High School in 1915.  Upon graduation, he attended the University of Washington where he received a bachelor’s degree in architecture in 1920.  He then went to work for architect Harlan Thomas (1920-21); and had a short stint with the Metropolitan Building Co. (1921) before opened his own firm in 1925.  It was during this time that he acquired his State architectural license on August 10, 1922 (no. TL9).  Within four months of opening his own firm, Lockman formed a partnership with Otis E. Hancock (1925-33).  Known projects by the firm of Hanock & Lockman are limited to the Barnum & Lemcke Building in Ballard (1927).

Projects were scare during the Depression years, so Lockman took a job as an assistant architect for the US Bonneville Power Administration in Portland (1939-40).  He then went to work for US Army Corps of Engineers, Seattle District, rising to the title of Chief of the Design Section & Engineering Branch of Alaska operations (1941-45).

During his career, Lockman was very active in the state and local chapters of the AIA.  He served as State AIA director (1927-1930); was on the Seattle AIA Medical Facilities Committee (1957-59); and acted as Chairman of the Seattle AIA chapter Education Committee (1960-61).  He was also a member of the planning board for Fort Lewis and Fairchild AFB and acted as the chief negotiator for architect-engineer contracts for the US Army Engineering District Seattle.