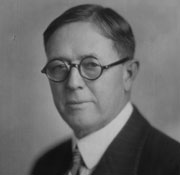 Seattle architect Harlan Thomas was born in Des Moines, Iowa on January 10, 1870, and raised there until 1879 when his family migrated to Fort Collins, Colorado.[2]   At an early age Thomas possessed an intense interest in architecture, drawing and mechanics.  Augmented by experience as a carpenter, he became a draftsman for the Denver architecture firms of Baerresen Brothers (1890), and A.M. Stuckert (1891). In 1891 he began to attend Colorado State College in Fort Collins majoring in mathematics and mechanics.  While there he taught drawing classes and graduated with a Bachelor’s of Science degree in 1894.

Before he graduated, Thomas had already designed two campus buildings, Agricultural Hall and the Industrial Arts/Mechanics Shop, as well as several family homes in the community.  With experience and a degree in hand he opened his own architecture practice in Denver in 1894. The next year he married Edith Partridge and together they departed on a honeymoon trip to Europe. They extended their stay for sixteen months, during which Thomas undertook architectural studies in Paris at an American Atelier. The urge to travel and expand his skills remained with him throughout his entire career.

Upon their return to Denver in the fall of 1896, Thomas reestablished his architectural practice. During this period, he is known to have designed numerous buildings in the Denver area and elsewhere in Colorado including the Fort Collins Methodist Church, Greeley High School, Stratton Hall at Colorado College of Mines, and a family home in Montclair (a Denver suburb) where he also served three terms as mayor. During 1903 and 1904 he took a fifteen month, round-the-world tour with his wife and two small children, again focusing on further architectural study, sketching and painting. He continued his thriving Denver practice until the family moved to Seattle in June 1906.

Facilitating the move may have been a commission in 1905 to design the National Park Inn at Longmire on Mt Rainier (destroyed by fire in 1926). Luckily for Thomas, the momentum from his successful career in Colorado continued in Seattle, and he almost immediately received several high profile commissions.  Among his earliest local commissions were home for Roy Kinnear; a bungalow for William Bremer; and a house for Mrs. Kate Noble (1907, 1700 37th Ave).  On the multi-family dwelling side, projects included the Rosita Villa Apartments and the Chelsea Family Hotel (1907-08, both on the southwest slope of Queen Anne Hill); as well as the nominated building, the Hotel Sorrento (1909).  These apartment projects represented a fresh standard for Seattle apartment/hotel living as well and showed Thomas’s willingness to divert from the traditional architectural vocabulary at the time.

He also joined in a variety of short term collaborations with other firms that produced distinctive designs. These the Queen Anne, Columbia and Douglas Truth Libraries (1912-13, with Marbury Somerville); the Chamber of Commerce Building (1923-24, with Schack, Young & Myers); a proposal for the Oregon State Capitol (1936, with Lance Gowan, Henry Olschensky & Arthur Herrman); and Daniel Bagley Hall at the University of Washington (1936, with Floyd Naramore) and a five-hundred unit WWII defense housing project in Bremerton (1940, with Smith, Carrol & Johanson).

In addition to his private practice, Thomas was highly regarded for his role as an educator at the University of Washington. He served as a professor of architecture and served as the department head from 1926 to 1940.  He was also active in the Seattle chapter of the American Institute of Architects serving as the chapter president from 1924-26, and was elected a fellow in 1928. Thomas was also a prolific watercolor and sketch artist and is known to have continued to travel, sketch and paint throughout his long career.  He was an active member of the Seattle Fine Arts Society and was respected watercolorist, participating in exhibitions, especially after his retirement in 1949. Thomas passed away in Seattle on September 4, 1953 at the age of 83 in Seattle.

Thomas is considered to have been one of Seattle’s most urbane, versatile and influential architects.  His worldly background, Beaux-Arts era training and true artistic skill are demonstrated in his ability to create composite stylist treatments for distinctive modern buildings. His body of work was eclectic, relying on both historical precedents and modern idioms to develop a design appropriate to each project. He most likely used his vast travel experiences as inspiration for many of his designs.  For instance it is believed that the distinctive design of his Chamber of Commerce Building (1924), a Late Romanesque Revival style building, was inspired by twelfth century churches he observed in the northern region of Lombardy, Italy. His design for the Hotel Sorrento is believed to be based off of Italian models such as the Villa Medici in Rome and the Excelsoir Vittoria/Grand Hotel Vittoria in Sorrento.