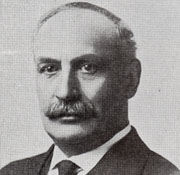 Henry Osterman's contribution to the architecture of Walla Walla is profound.  Author Lyman's 1918 History of Walla Walla County notes that "practically all the important business and office buildings in the city, together with many of the finer residences" were designed by Osterman.   Today six of his designs are honored in the National Register of Historic Places including his own home (508 Lincoln St.), the Tudor style Liberty Theater (1917), and the Walla Walla Carnegie Library (1905).  The 1906 Walla Walla Fair Pavilion is one of Osterman’s more unusual designs.

Henry Osterman was born near Essen, Germany in 1862.  His family was involved in farming and milling.  He served three years in the German Army before coming to the United States in 1889 at the age of 27 with his brothers William, Frank and August.  The four brothers, for reasons unknown, settled in Walla Walla.  While they had little knowledge of the English language or of building practices in the northwest, they found work as carpenters.  With the exception of Henry, all of the Osterman brothers returned to Germany around 1896.  By that time Henry had begun to work as a general contractor and by 1899 like many builders of the day, he started to advertise himself as an architect (he used his home address for his office).  Any formal architectural training that Osterman had remains unknown, but there is reference to having some type of training in Dussuldorf before he immigrated to the United States.  He did however receive his architectural license in 1919 when Washington Sate began registering architects (Certificate #119).

In 1902 Osterman married Geneva Cooney of Iowa.  With a new family at home, in 1905 he moved his office into the downtown and accepted his first associate, Victor E. Siebert, in 1912.  A native of Walla Walla, Siebert actually began his architectural studies with Osterman at the age of 18.  He remained in the office as a draftsman for three years, then went east to complete his education, entering MIT in the fall of 1906.  While there he pursued a special course in architecture, attending the institution for four years.  After completing his studies he entered into partnership with Peter F. McLaughlin and they established business in Pittsfield, Massachusetts, under the firm name of McLaughlin & Siebert.  The partnership lasted for two and a half years.

Osterman retired in 1927 and moved to Seattle to be near to his son.  He passed away there on June 4, 1936.  His son, Hugo, and grandson, Henry L., also became architects and practiced in the Seattle area through the 1960s.