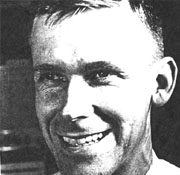 Ibsen Andreas Nelsen was a prominent Seattle-based architect and influential figure in American art and architecture. He was born in Ruskin, Nebraska in 1919 to a Danish immigrant father who worked as a cabinet maker. In order to escape the Dust Bowl, Nelsen moved with his family to Medford, Oregon where he graduated from high school.  He served in the Army during WWII in the Pacific and earned a Bronze Star and a Purple Heart.  On the GI Bill, he attended the University of Oregon where he earned his degree in architecture in 1951.  He then moved to Seattle where he was employed for a short time with NBBJ.
In 1953, at age 34, Nelsen opened his own practice in the University District.  The next year he took on Russell Sabin partner.  Together, the firm of Nelsen & Sabin (1954-60) and later Nelsen, Sabin & Varey (1961-67), created a variety of award winning designs for clients across the Pacific Northwest.

Early in his career, Nelsen committed himself to the creation and promotion of architecture which was close to the earth and highly accessible to people of simple means. He lived and worked in the belief that a young veteran returning from service in WWII deserved a well-designed and affordable family home.  He contributed to the Home Plan Bureau, which made residential designs of good quality accessible to those less than affluent.  Homes that he designed appeared frequently in the early decades of the AIA Home of the Month program which began publication in The Seattle Times in 1954.

The firms of Nelsen & Sabin and Nelsen, Sabin & Varey focused mainly on residential projects which can be found scattered throughout Seattle.  Among their more notable projects were the Benjamin Weeks House (1961) which received an AIA Honor Award and Lincoln Steel Foundation Award; the  Latter Day Saints Chapel/Mountlake Ward (1961), also an Honor Award winner; and a home for artist Morris Graves in Lolita, California (1967).

In 1968, Nelsen established his own independent practice and began taking on large-scale projects.  His work included a variety of buildings at Western Washington University including Bond and Miller Hall (1968), Arntzen Hall (1972), the Social Science Building (1974), and the Northwest Environmental Studies Center, a 1981 Honor Award winner.

Nelsen was also active in his community and served on many boards. His interests centered upon historic preservation and urban renewal in Seattle. Nelsen was instrumental in the initiation of the Seattle Design Commission, the Seattle Arts Commission, Allied Arts of Seattle, and the Save the Market campaign.  He was an assistant professor at the University of Washington from 1957-65 and became a Fellow of The American Institute of Architects in 1981.  In 1989, Nelsen received an AIA Seattle Gold Medal.