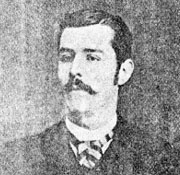 Spokane architect Isaac J. Galbraith, was born on November 1, 1859 in Monogahela, Pennsylvania.  His formal architectural education began at the Weslyan Institute and then he apprenticed with a "prominent" architect in Pittsburgh.   While in Pittsburgh he formed a partnership with fellow architect Robert McBride, practicing there until 1882.  His firm had the distinction of designing the first ten-story building in the city.  For reasons unknown, Galbraith moved to Yankton, South Dakota where he designed some of the more prominent buildings in the communty including the Yankton National Bank (1893); the Ward Science Hall (1893) at Yamkton College; the High School (1895) in Lead, and the Immaculate Conception Catholic Church in (1894) in St. Helena, Nebraska.  Due to ill health, Galbraith moved to Livingston, Montana  in 1887 where opened a practice with J.R. Fuller.   Known projects by the firm of Galbraith & Fuller include the Kootenai County Jail (1892) in Rathdrum, Idaho; the Montana State Building for the Chicago World's Fair; the Elks Lodge in Moscow;  Nez Perce School; St. Joseph's Academy & Hospital; and several business blocks and schools in Missoula.  Over a ten year period, the firm grew to open branch offices in Bozeman and Missoula.

In 1898 Galbraith moved to Spokane, most likely to seek his fortune in the mining industry.  He is not listed in local Polk Directories as an architect until 1902 and within a year he had formed a short-lived partnership with architect Alfred Jones.  By 1904 he was on his own, but then took on another partner, Harold Hals, in 1905.  That partnership lasted only a year as well, and Galbraith continued to practice on his own until 1909.

Despite his short architectural career in Washington State, Galbraith designed a variety of noteworthy structures in the Spokane region.  Known projects include the Gandy Block; the Commercial Block (1906); the First Methodist Episcopal Church; the Holmes Block (1904); the Vinther & Nelson Hardware Store (1905); the Roberts-Lingston House (1904); the Sarsfield Farmhouse (1905); and the Julius Dutton House (1906).

By 1910 Galbraith retired from architectural profession at age 51 and entered into the contacting business with John F. Telander.   Known as “Gailbraith & Telander”, John Telander remained with Galbraith in the new business venture until 1913, when his son, Charles, joined the firm.  The business, then operated under the name “Galbraith & Son,” and existed until 1914.  Known projects are limited to the construction of the County Infirmary in Spangle.  Galbraith is presumed to have retired in 1915 and is not listed in the Spokane City directories thereafter.  Some reports indicate he passed away in Portland, Oregon in 1926, although this has not been verified.