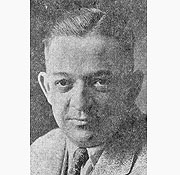 Jacque "Jack" deForest Griffin was born in Los Angeles, California on January 7, 1892.  After graduating in 1912 from the University of Santa Clara, Griffin moved to Seattle where he reportedly formed a partnership with Irwyn H. Hill and later joined architectural firm of Hewitt-Lea-Funck.  By 1917 Griffin and Hill formed a new partnership with Arnott Woodroofe in Tacoma. 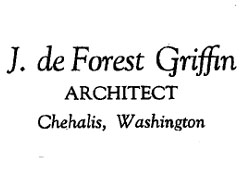 In 1924 he formally left the partnership and opened his own independent firm, quickly becoming Lewis County's most prominent architect.  Griffin designed many of the area's most important buildings in the 1920s including the St. Helens Theatre (1924); the Moose Lodge (1926); Boone Mortuary (1928); Junior High School (1927); Cascade School (1927); all in Chehalis.  Outside of Chehalis projects included the Fairhart Building (1924) in Morton; the Eagles Lodge (1926) in Centralia;Catholic Church (1924) in South Bend; a gymnasium for the Boisfort School District (1924); and St. Rose Catholic School (1927) in Longview.  He gained also notoriety throughout the Pacific Northwest with his design for the Lewis County Courthouse (1927) which was featured in the Pacific Builder and Engineer magazine in 1926.

In 1928 Griffin moved his practice to Hollywood, California after designing a home there for his cousin, actress Bebe Daniels.  While working on the project he gaining a large number of additional commissions.  The local Chehalis newspaper reported that Griffin had around one million dollars of business on the boards by the end of 1929.  Among his more notable projects in California was the Eiffel Tower Theater in Burbank.  He sold his Chehalis office to Fred G. Rounds, a seasoned architect and former instructor at Washington State University in Pullman.

Many of Griffin’s designs show a strong influence of Spanish Colonial Revival and the Mission Revival Style, most likely as a result of his architectural education in Southern California.  His designs also show influences of Beaux Arts and Italian Renaissance Revival architecture, all popular styles in the 1920s.

" Chehalis Merchant Completes One of the Prettiest Homes in This District" The Chehalis Bee-Nugget March 25, 1927.

" Lunching with the Governor" The Chehalis Bee-Nugget Sept.9, 1921.

" In another section of this paper of call for bids for the building of a frame" The Chehalis Bee-Nugget April 25, 1924.