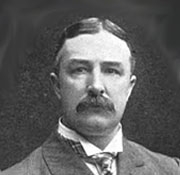 Seattle architect James Eustace Blackwell was born in Fauquier County, Virginia in September of 1855.  He was trained as a civil engineering at the Bethel Military Academy in Warrenton, VA, and graduated as a 1st Lieutenant.  His skills in civil engineering prepared him well for an initial career in surveying.  Reportedly upon graduation he worked as a civil engineer, engaging in land surveying and engineering on the James River and Kanawha Canal in Virginia.  Then in 1888 he took a job in Washington, DC working in the office of Federal Supervising Architect.

Some reports indicate that Blackwell practiced architecture in Rochester, NY before arriving in the Pacific Northwest in 1891, although this has not been verified.  He most likely came to Washington State to work on a design for the first drydock at the Puget Sound Naval Ship Yard in Bremerton.  While working on the project he lived in Charleston (a suburb of Bremerton).  Active in social and political circles, Blackwell sat on the town council and eventually became mayor.

During this same time period he also entered into a partnership with architect Robert L. Robertson. The firm Robertson & Blackwell first had offices in Tacoma (1891-1893), but then moved to Portland, Oregon for a short time (1894-1897) before opening up an office in Seattle (1897-c.1906).  Known projects by the firm include the Louderback Building (1890) in Tacoma; Vorhees’ Grain Elevator (1891) also in Tacoma; the Puyallup Opera House (1891); a warehouse for the Puget Sound Machinery Depot (1902); and a rear addition to the Yesler Building (c.1904) in Seattle.

In 1917, for reasons unknown, the partnership was dissolved and Blackwell continued an independent practice for another 10+ years.  During the early 1920s Blackwell served as the City Superintendent of Buildings (1920-22) for the City of Seattle.

Later projects, many of which have a Late Gothic Revival  style, include the Fairfax Apartments (1923) on Capitol Hill; Shafer Building (1924) in downtown Seattle; and the Evans’ Building (1930) in Renton.  His last known project was a large women’s ward building (Ward L-M) for Northern State Hospital (1933) in Sedro-Wooley.

Throughout his career, Blackwell was involved in a variety of social and civic organizations.  He served as resident engineer for the United States Shipping Board (1918-1920).  He was a member of the Board of Public Works, the Rainier Club, the Municipal League of Seattle, the Chamber of Commerce, the Seattle Zoning Commission, and was the director of the Commercial Club. Blackwell as also an active member of the Washington State Chapter of the AIA, serving as Seattle AIA President in 1905 and was a member of the Pacific Northwest Society of Engineers.

"Plans for Library are Complete and Approved" Morning Olympian- December 30, 1913.