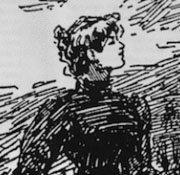 Katherine “Kate” Lockwood Squire, holds the distinction of being among the earliest women in America to formally practice architecture, either as draftsperson or architectural designer and was probably the first female residential designer on the West Coast.

She was born in 1854 in Painesville, Ohio on May 24, 1854.  The daughter of wealthy Michigan lumberman James K. Lockwood and his wife Eliza, she reportedly attended law school at the University of Michigan, but was forced to drop out of school when her mother became ill.

Then in 1871, at the age of 17 she married Albert E. French, who was a practicing architect in Detroit. It was through him that she developed an interest in architecture and he took her under his wing.  While working with him she reportedly helped design the State House of Corrections in Ionia, Michigan and the First Baptist Church in Detroit. Their marriage was short-lived, and in 1873 she moved to Pittsburgh, Pennsylvania. While there she lived with her uncle, a building contractor who was busy constructing the first blast furnace for the grand steel mills of Michigan.  Honing her skills as a draftsman, she helped him prepare mechanical drawings for the blast furnace.

Wanting to further her education, in 1879 she enrolled in Cooper Union’s architectural program in New York City.  While she stayed at the school just a year and did not formally graduate, she gained valuable skills. Some biographies note that while in the city, she worked as an interior designer with artist Theodore Baur, and did some patent drawings for Thomas Edison, but this has not been verified.  She also may have assisted in the design of the courthouse in Charlotte, MI.

Upon the death of her father and seeking change, in 1882 she headed west. Records are unclear as to when she arrived in Washington state but documents show that on January 6, 1887 she married her second husband, Tacoma resident Francis “Frank” O. Squire. They were married in Detroit, Michigan but lived in Tacoma.  Frank was a carpenter and inspector for the Tacoma Building & Savings Association, a development and mortgage company.

According to local newspapers, by 1887 Katherine, who was then in her mid 30s’, also took a job working for the Tacoma Building & Savings Association.  Reportedly they hired her as a “draughtsman” to modify modest ready-made plans. She quickly gained fame and received several independent commissions for middle-class family homes and at least one commercial building. To date historians have documented over two dozen homes by Squire, however only two remain: 1012 North Ninth Street and 1010 South 7th Street (moved from 704 S. J St.).

Due to her husband’s illness they decided to move to California.  On May 27, 1888, the Tacoma Daily Ledger published the following note: “Mrs. Lockwood Squire, the able architect of the Tacoma Building & Savings Association, left for San Francisco yesterday on account of the illness of her husband. She has been obliged to give up work for the present and goes south with him and possibly to New York. During her stay here she has made many friends who regret exceedingly to have her leave the city. As an artist and architect she leaves twenty-eight dwellings of her design to stand as a monument for her.”

Unfortunately, Frank passed away shortly after the couple arrived in California in 1890.  Within a year, at the age of 37, she married a third time.  By then known as “Kate”, she and Louis L. Nevins were married in Berkley, California on October 29, 1891.  Reportedly they became inn keepers at a once popular tourist stop called Mountain House at the base of Mt. Diablo, just east of San Francisco.  After the inn burned to the ground, the couple moved further up the mountain and established a ranch which they called The Bee Ranch.

City directories show that Kate had moved back in the city of San Francisco by the late 1890s.  She is listed as an architect in the 1897 and 1898 Polk Directories. Little is known of her work during this period and no designs by her have been confirmed.

Kate and her husband Louis were actively involved in the Farmers’ Alliance movement which sought to improve the economic conditions for farmers through the creation of cooperatives and political advocacy.  Together they helped cofound a socialist utopian community on Winter Island at the confluence of the San Joaquin and Sacramento Rivers in Contra Costa County in 1893.  Called “Co-operative Brotherhood”, the 636-acre island flourished to a peak of 100 settlers. Kate may have designed the four buildings on the island. Around 1900 they decided moved to the island, but the co-op failed shortly thereafter.  They took a job as government lighthouse keepers. Slowly the population of the island dwindled until only the Nevins remained.  On the island the Nevins lived in a cabin salvaged from the ship wrecked stern wheel steamship, the Orizaba (which Kate later tried to donate to the State).   During her leisure hours, Kate painted, sketched and made small porcelain statues. After her husband’s death in 1921, she continued as lighthouse keeper.  At the time she was the only woman in western waters to hold such a job.

Kate found it increasingly difficult to live alone on the island and eventually moved to the nearby community of Antioch around 1930. She died in Napa, California at the State Mental Hospital on December 3, 1943 at the age of 89.

“A Million Neighbors and Not One To Visit: Woman Lighthouse Keeper Likes Solitude of Life on Winter Island” – The Oakland Tribune, April 10, 1927.