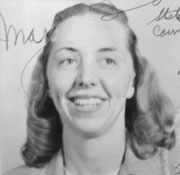 Born in 1922, Mary Lund Davis grew up in Sacramento, California. She graduated with a B.A. in architecture from the University of Washington in 1945. While a student, she interned with the architectural firms of Chiarelli & Kirk, Moore & Massar and Thomas, Grainger & Thomas, which were influential in developing her appreciation for modernist design.  Davis was the first female architect in Washington to become licensed after WWII, receiving her license in 1946.

Davis designed both residences and small commercial buildings and practiced in limited partnerships with various other architects including her husband, George L. Davis, Jr.  Among her more notable work is a home designed for her father-in-law, George Davis, which was described in the local press as “Frank Lloyd Wright inspired.”

During the 1950s, Davis was a regular contributor to the Douglas Fir Plywood Association, supplying plans for home designs and “you build” furnishings.  Copies of the architectural plans and softbound books such as “52 Fir Plywood Home Storage Plans,” which featured Davis’ designs, were distributed widely throughout the country. Davis currently resides in Gig Harbor.