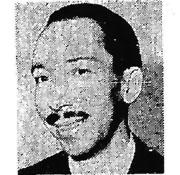 An outsider within the mainstream architectural community, Milton Stricker made a unique impact on the built environment of the Pacific Northwest.  Stricker holds the distinction of being the first Frank Lloyd Wright apprentice to be licensed to practice in Washington State (No. 868, 1955).

Milton Arthur Stricker was born on March 9, 1926 in Clayton, Wisconsin.  After serving as an Ensign in the Navy during WWII, which brought him to Bremerton for a short time, Stricker began his formal architectural training at the Carnegie Institute of Technology in Pittsburgh, PA in 1947.  While in school he apprenticed with architect Walter E. Schardt.  Dissatisfied with his education and the academic push towards the International Style, Stricker dropped out of Carnegie on the eve of his graduation and joined the Frank Lloyd Wright Fellowship in 1951.  While he stayed at the Fellowship for only one year, Wright and the teachings of the Fellowship had a strong and lasting impression on the young architect.

Eager to start a career, in 1952, Stricker became a draftsman for Raymond Roubal, a structural engineer in St. Paul, MN.  He then took a job with architect Albert Plagens.  A year later he moved to Denver, and joined architect Ralph Peterson.  With fond memories of the Pacific Northwest, Stricker moved to Seattle in 1953, and joined the architectural firm of NBBJ, working his way up to associate level.  Wishing to gain experience in a smaller firm, he then joined the firm of Gotteland & Koczarski in 1959 but left the firm in 1962 to open his own practice.  Before branching out on his own, Stricker moonlighted on the side and completed eight projects of his own from 1955 to 1962.

Working from a home studio and office, Stricker’s unique “organic” designs ranged in plan from V-shape to Y-shaped, and used a complex geometric abstraction as expressed in the plans, sections and elevations of his projects. Licensed in four states, Stricker completed over 130 projects for clients throughout the Northwest, Alaska and New Mexico.  Many of his projects are dwellings which boast a careful orientation to their natural sites and custom built-in furniture. 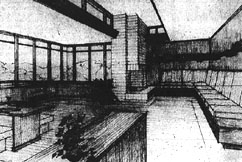 During his career, Stricker also designed over 40 churches mostly for the Lutheran Church.  Among his first independent projects was the Hal Mackey House in Seattle (1962) which was featured as a Seattle Times Home-of-the-Month project and was published in New Homes Guide. Nine more Home-of-the-Month projects followed and commissions, all of them examples of his Wright-influenced convictions and talent, steadily poured in for the next thirty-six plus years.

Stricker retired from his practice in 1998 and spent his later years writing, painting, and photographing. Towards the end of his career, Stricker dedicated himself to the task of communicating his insights into the process of artistic abstraction as the source and generator of Organic Architecture, culminating in the book, Design Through Abstraction: The Wright Source to Art and Architecture, which is available to the public through a website.