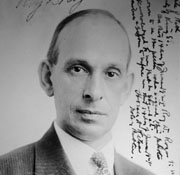 Born in Minneapolis, Minnesota on March 18, 1876, Roy Drake Rogers received his architectural education through a variety of hands on experience and courses at an unknown college in Boston.  He gained practical experience by working for the fashionable architectural firm of Andrews, Jacques & Rantoul of Boston, Massachusetts.

By 1912, Rogers was in private practice. Like many architects of the day, his designs range in an electric mix of period revivals from Tudor Cottages to Dutch Colonial dwellings.  Rogers recieved his architectural license in 1924.  He reportedly designed many homes in the Broadmoor and Magnolia neighborhoods in Seattle.  Known designs include the Theodore Torbeson House (1927); the Abe Sherman House (1928); and several homes for the Blue Ridge Land Company (1931).

Rogers was active in the Society of Architects, serving as the State chapter president in 1925.  He moved to California around 1934 and reportedly designed homes for many Hollywood movie actors and actresses.  He passed away in Los Angeles on September 2, 1951.