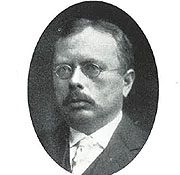 Architect Theobald Buchinger was born in Austria in 1866 and trained at the Vienna Polytechnic University before coming to the Washington Territory in 1886.  After working as a draftsman for a variety of Seattle and Tacoma architects, Buchinger formed a partnership in 1899 with fellow architect Paul Bergfeld.  Their work together included several brewery buildings for the Hemrick Brothers and small business blocks as well as the St. Charles Hotel (1902) in Ballard.  For reasons uknown, Bergfeld & Buchinger parted ways.  Bergfeld moved to Tacoma and opened up a short-lived partnership with L.M. Drack.

In March of 1905, Buchinger began a new, but short-lived, two-year partnership with German-born architect Alfred Breitung.  Together the two men secured a large number of large commissions from the Seattle Catholic Archdiocese.  Known projects include the House of the Good Shepherd Center (1907); the Academy of Holy Names (1908); a social hall for the German Turnverein (1906); Saint Alphonus School (1907); St. Jospeph Catholic Church (1907); a Catholic church in Seward, Alaska (1905); and a school building for the Lourdes Academy (1908) in Ellensburg.

The partnership was dissolved for unknown reasons in 1907, and Buchinger returned to independent practice.  Known projects are limited to a large 2nd story addition the Supply Laundry Building (1914) in South Lake Union neighborhood of Seattle; Saint Mary’s Catholic Church (1912); and a three-story hospital (1922). In 1919, when Washington began licensing architects, Buchinger received Washington license No.22 under the grandfather clause.

He continued a modest independent practice until forming a partnership with architect Louis L. Mendel in 1924.  The onlyproject by the firm identified to date is a bungalow style apartment court (1925) at the corner of 20th Ave. and King Street.  For reasons unknown, the partnership was dissolved in 1928.  Buchinger took on another partner, engineer Robert M. Thorne, the next year.  His association with Thorne lasted only a year and Buchinger continued to practice on his own until the late 1930s.  His only known later projects include an extensive remodel of the former Seattle Assay Office for the German Club (1935); and a home for A.L. Franzke (1939).

Buchinger was elected President of the Washington State Society of Architects in 1926, and passed away in Seattle on December 24, 1940.

"Bungalow Apartments Will Be Constructed" - Seattle Daily Times: May 3, 1925.