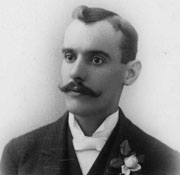 Architect Walter Richard Stalker born in the southern Idaho community of Franklin on February 14, 1877.  His parents were devout members of the Latter Day Saints church, and he grew up in a polygamist family with four moms and 25 siblings.  His dad, Alexander, was a cabinet maker/builder, whom had immigrated from Scotland in 1847.

Walter and his older brother William H. attended the University of Oregon preparatory classes from 1894-97, but unlike his brother, Walter did not formally graduate with a college degree. Instead according to census records he followed in his father footsteps and became a carpenter.

Stalker married Ms. Blanche E. Walker on February 17, 1889 in Union, Oregon.  Together with they had four children (Leo, Manson, Jean and Peter).  Documents indicate that Stalker married again in 1904.  It is unclear if his second marriage to Percie Hellen Morton was in keeping with the strict religious practices of the church, or if he divorced his first wife.  Regardless, city directories indicate that by 1904 he was living in Spokane and was employed as a carpenter. By 1905 he had moved to Pendleton, Oregon where he began to market himself as a “Designer, Contractor & Builder.”   While he advertised heavily in the local newspaper the only known work attributed to him is a seven-bedroom home for W.H. Rish.

By 1907 Stalker had moved to Walla, Walla and is listed in the local directory as a draftsman, most likely working for an architect in the city.  With experience at hand by 1908 he began to bill himself as an architect.  However, with little training, by 1910 his stated profession had reverted back to a carpenter.  To date no documented buildings in Walla Walla have been attributed to Stalker as an architect or builder.

At the age of 36 he moved to Portland, billing himself off and on as an architect and/or carpenter.  He remained in the city until about 1920 when he moved to Los Angeles.

No projects in Oregon or California have been attributed to him. Stalker married for a third time in 1924, and passed away in Los Angeles on December 19, 1949 at the age of 72.