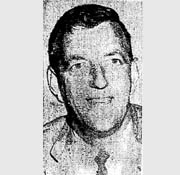 Landcape architect William G. Teufel was born in Fairbanks, Alaska, on April 5, 1925. In the late 1930s, his parents, Frank and Lucille Teufel, moved to Seattle where, for nearly 40 years, they operated a greenhouse in Madison Park neighborhood. It was there that William developed an early interest in landscape architecture.

Upon graduation, in 1953 Teufel opened a private landscape-architecture firm in Seattle and for nearly 40 years, he collaborated with many of the best architects in the Pacific Northwest.  This association led to a variety of publications in local and regional newspapers.  In fact, Teufel seemed to have a knack for working with architects whom designs were highlighted as Seattle Times Home-of-the-Month (completed landscape designs for eight homes between 1955 and 1964). Among the notable residential projects are the Lewis J. Dowell House (1954 with Paul H. Kirk); the Dr. Harry Rice House (1955 with Gene Zema); the Electri-Living House (1956 with Paul H. Kirk); Don Kalis House (1958 with Gene Zema); the Dr. Robert Zech (1959, with Bystrom & Greco); the Frank Gilbert House in the Highlands (1960, with Paul H. Kirk); a Seattle Times Home-of-the-Month (1964, with Bell & Greve); and the Dr. Peterson House in the Canterbury neighborhood of Seattle (1968, with Barden Erickson);

Teufel was also considered by his peers to be one of the most accomplished golf-course architects in the nation.  His appreciation for the greens began in high school.  He ranked No. 1 on the Garfield High School golf team and during those years he caddied at the Broadmoor Golf Club to earn extra money. His golf course projects include the Wing Point course on Bainbridge Island (1963); Twin Lakes Golf & Country Club in Federal Way (1966); Useless Bay Golf Course in Langley (1966); Tam-O-Shanter  Golf & Country Club in Bellevue (1967); Fairwood Golf Course in Maple Valley (1968); Hat Island Golf and Country Club on Hat Island (1969); Wing Point Golf and Country Club in Bellevue; Colockum Ridge Golf Course in Quincy; the Eagles Pride Course – Green/Red on Fort Lewis (1979); the Quincy Valley Course in Quincy (1986); and Gleneagles in Arlington (1993).

One of his proudest accomplishments was acquiring a 3-acre site in Woodinville on a hillside lot (13102 NE 146th St, ), where in 1988 he worked with an architect to design his own home. On the site he planted 4,500 rhododendrons and held an annual spring garden picnic that attracted hundreds of friends.

In 1995, Teufel was inducted as a "fellow" of the American Society of Golf Course Architects. He was a founding member of the Northwest Forum, a private group drawing from various professions that meets to discuss solutions to regional problems.

“Seattle’s Distinctive Charm: What Should Be Saved” Seattle Times, April 12, 1964

“Home Near Kirkland in Community With Playground” Seattle Times, September 25, 1966

“Reborn – Port Ludlow Will Preserve Part Of Its Historic Past” Seattle Times, July 21, 1968