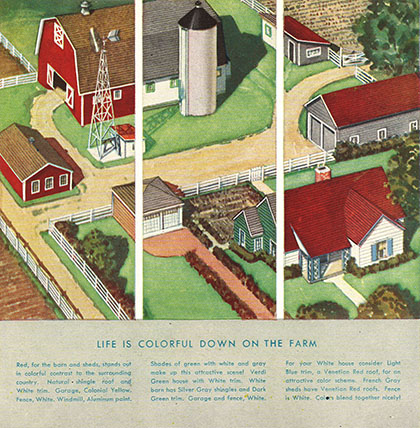 There are several theories as to why barns are painted red.  One belief is that barns are red so a farmer's cows can find their way home, but if so, that's a failed strategy since cattle are colorblind to the colors red and green. Others believe the popularity of red barns came from copying Scandinavian farmers, who painted their properties in rusty hues so that they would appear to be made of brick, a material they considered to be a sign of wealth.

The truth is barns weren't originally red, in fact, they weren't painted at all. The early farmers that settled in New England didn't have much extra money to spend on paint, so most of their barns remained unpainted. By the late 1700s, farmers began looking for ways to shield their barns' wood from the elements and began experimenting with ways to make their own protective paint.  Reportedly Virginia farmers were the first to become paint-conscious. In Pennsylvania, the Dutch settlements latched on to the custom of red bricks, red barns, red geraniums, even reddish-brown cows. Painting your barn a red color caught on. Inasmuch as ready-made paint was not available, a farmer mixed his own paint. He discovered that skimmed milk, lime and red iron oxide made a plastic-like coating that hardened quickly and lasted for years.  Linseed oil was subsequently added to the recipe to provide the necessary soaking quality. Thus American “barn red” was born. It came into being through function and utility, rather than decor or superstition.

So where does the red come from?  In historically accurate terms, "barn red" is not the bright, fire-engine red that we often see today, but more of a burnt-orange red. As to how the oil mixture became traditionally red, there are two predominant theories: 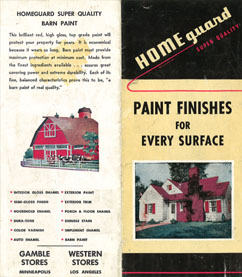 Regardless, farmers also noticed that painting their barns with the homemade paint kept the buildings warmer during the wintertime, since the darker color absorbs the sun’s rays more than plain, unpainted wood. Red paint spread in popularity due to its functionality and convenience, becoming an American tradition that continues to this day.

In the mid to late 1800s, as paints began to be produced with chemical pigments, the demand for a special paint for barns, fences and outbuildings occurred.  Many paint manufactures prepared a special paint compound from metallic oxides which were offered in a limited range of colors, red being the most popular.  These paints sold at a much lower price per gallon than house paint, hence attracting the every-so-thrifty farmer.  Red was the color of favor until whitewash became cheaper, at which point white barns began to spring up.

Today, the color of barns can vary, often depending on how the barns are used, but red remains a popular color.  A survey of our listed Heritage Barns identifies that nearly half of the 600 listed barns were original or are currently painted red. Several manufacturers still provide paint specially formulated for barn use.  The red color however varies widely from manufacturer to manufacturer. 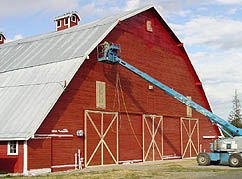 Sherwin Williams® carries a paint called 'Barn Red', SW7591. BAER also has a 'Barn Red' #SC112; but so does Ralph Lauren #CO07D. We discovered an old paint brochure from the 1930’s (Home Guard Paint) specifically advertising “Bright Red” barn paint.  After taking this sample to our local paint store to be analyzed, the formula comes out like this.

Remember, when painting a barn, as in all other painting, be sure the surface is perfectly dry, and it is good painting weather.  Paint will never stay on a wet or damp surface.  And don’t forget to follow the directions given by the manufacturer in detail.