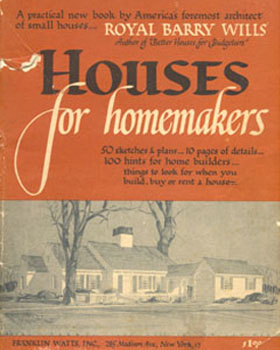 The simple Cape Cod Revival style was one of the last house types of the American colonial era to be revived as a building form.  Utilized exclusively for dwellings, the model for the style came from dwellings in Massachusetts and New York fishing villages.  Built from 1700 to about 1850, many of the original Cape Cod dwellings were devoid of any architectural embellishments while others were often embellished with classical details.

The revival of the style began in late 1920s when it began to appear in a variety of shelter magazines and home builder catalogs.  By the late 1930s it was among the most popular of the Colonial Revival styles.  The design was featured advertisements for a variety of home products and was often constructed as a model home for new developments and home shows.  Among the better examples was the Portland, Oregon based Western Pine Association’s model home at the 1939 San Francisco Exposition.  In the Pacific Northwest, the best examples date to the late 1930s.  While the design was still being published after WWII, by the mid 1950’s its use had nearly disappeared being replaced by the Ranch style and more modern house forms. 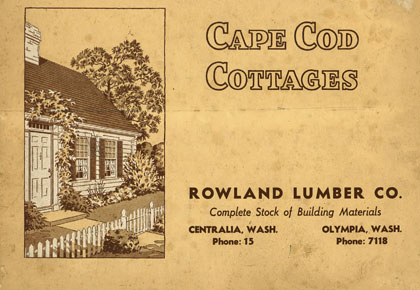 The revival of Cape Cod took a liberal interpretation of the original style and quickly became popular with many early suburban developers and first time home buyers.  The basic form of the house is a simple rectangular footprint, 1 to 1 ½ story in height with a steep pitched roof.  Devoid of dormers on the main façade, architectural detailing is limited to multi-pane windows with decorative shutters, brick chimneys and highly detailed entries.  Exterior are commonly of wood clapboard, but examples of shingle and brick can be found.  Roofs are clad in wood shingle and asphalt and have little to no overhang.  Some examples have attached subservient wings which serve as extra living spaces or garages.