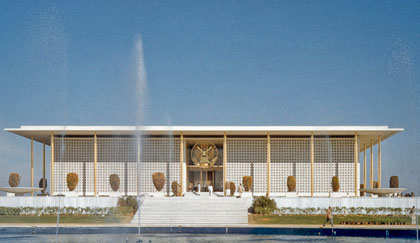 Sometimes called “Neo Palladianism”, New Formalism emerged in the 1960s as a rejection to the rigid form of Modernism.  The style represents yet another 20th century effort to wed the building forms of the past with new forms enabled by advances in building technology.  New Formalist buildings embraced many Classical precedents such as building proportion and scale, classical columns, highly stylized entablatures, and colonades.  However, they also used the newly discovered plastic-like qualities of concrete to create new forms such as umbrella shells, waffle slabs and folded plates.

Here in the Pacific Northwest, New Formalism was applied mainly to banking institutions and public buildings.  Some of the best examples are found on college campuses in the form of auditoriums, libraries, and museums.  Examples of small scale commercial buildings using the style can also be found, but are uncommon. 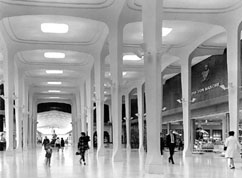 Buildings designed in the New Formalism style have a carefully organized hierarchy of space, and an emphasis is placed on the structural grid of the building.  A single volume structure is preferred, and the buildings are often separated from nature by being set on a raised podium or base.  Many have an exotic flavor and exterior wall surfaces of cast stone, brick and marble.  New Formalist civic buildings are designed on a larger urban scale and achieve a monumental presence by emphasizing symmetry and the axis or orientation of the building.  Later versions of the New Formalism style used exaggerated attic spaces to anchor the building to the ground.