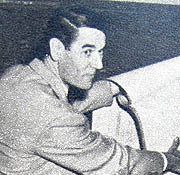 Considered one of Seattle’s most outspoken architects, Robert Reichert’s projects, although few in number, made a lasting impact on their surrounding environments.  Raised in Minneapolis, Reichert had two obsessions: architecture and organ music.  He noted that these obsessions were inspired by touring great cathedrals as a child and considered the two fields to be closely related.  After studying at the University of Minnesota and the Massachusetts Institute of Technology, he graduated from Harvard University with a Master’s in Architecture.  For a short time, he also studied at the Royal College of Organists in London. Reichert moved to Seattle in the late 1940s to begin his architectural career.  He received his architectural license in 1948 and taught sporadically at the University of Washington until 1979.

Reichert opened his own architectural firm in Seattle in 1951 with the intent of practicing what he termed philosophical architecture and romanticism in the arts.  He embarked on creating his distinctive style of architecture by designing bold, expressive, and controversial buildings.  Among his more notable works are the Egan House (1958) in the Eastlake neighborhood now owned by Historic Seattle, and his own home (1958) on Queen Anne, which incorporated an early use of “super graphics.”  Reichart's designs in Seattle were well publicized due to their unusual formal qualities, which differed from other Modern-era dwellings.  In 1959, Frederick & Nelson’s downtown Seattle department store displayed drawings of Reichert’s Seattle and Western Washington houses.  The display was sponsored by the local chapter of the AIA, and featured his concepts on windows as “elements of light diffusion and transparency.”  He described his designs as “romantic rather than functional . . . sculptural in form and traditional in mannerism.”