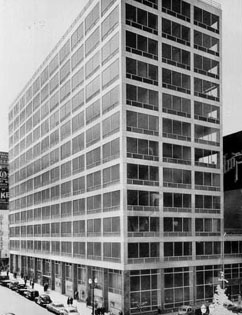 The Curtain Wall style refers to mid-20th Century buildings that use a prefabricated exterior wall sheathing system of glass and aluminium hung to their frames.  The curtain wall, by definition is a non loadbearing enclosure, comes in a wide range of systems that it can be made of virtually any combination of non-structural materials that meet insulation, wind-load and aesthetic requirements.  In this case however Curtain Wall style refers to buildings which utilized a glass and panel system for a majority of the exterior facade.

The use of such technology dates back to the 1909 Boley Building in Kansas City, which is credited as the first building to use an all glass exterior wall system. However, it was not until post-WWII when advancements in building technology allowed these systems to become widespread.

The first major example of the style was the Equitable Savings & Loan Building in Portland, Oregon executed by architect Pietro Bellushi in 1948.  As the world’s first fully enclosed air-conditioned building, this sleek 12-story structure quickly set the pattern for many post-war skyscrapers and small scale office buildings. 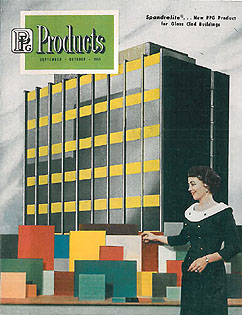 The curtain wall system is comprised of a repetitive grid of vertical extruded aluminum mullions and horizontal rails.  Panels called spandrels divide the large expanses of glass horizontally to hide the floors and ceilings.  These spandrel panels can come in a variety of materials.  Early spandrel panels were made of heat-strengthened opaque glass fused with colored ceramic.  The Pittsburg Plate Glass Company manufactured the glass panels under the trade name “Spandrelite,” and offered eight standard colors. The Libbey-Owens-Ford Corporation sold sixteen colors options under the “Vitrolux” brand.  Colors ranged from “Hunter Green” to “Cavalier Red,” to “Charcoal” and “Suntone” Yellow.  While customers could order custom colors, typical tones found in the Northwest included turquoise, pink and blue. Later, spandrels were available in other materials such as composite metal panels containing lightweight insulation cores, precast concrete panels, asbestos panels, porcelain enamel, tile, masonite, thin stone veneer, and plywood panels (a material particularly popular in the Pacific Northwest).  One of the main providers of curtain wall systems here in the Northwest during the 1950s and 1960s was Fentron Industries.

Considered suitable for virtually any size commercial, government or institutional building, the Curtain Wall style became widespread by the early 1950s.  Many post WWII buildings of varying styles also incorporated curtain wall systems into some facades but are not considered Curtain Wall style unless the majority of the visible facades are so constructed. The modular construction method used to construct the Curtain Wall style made it economical and popular for a time. However, by the late 1960s it was being replaced with a more smooth or Slick Skin application.