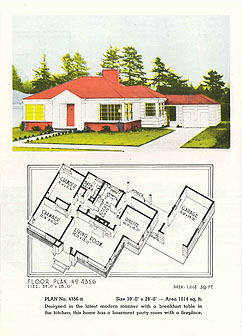 The WWII Era Cottage resembles the Workingman’s Foursquare of the proceeding decade but utilized the latest advancements in spatial planning and building materials. The type serves as a transitional form bridging the gap between the Bungalow and Cottages of the 1920s to sprawling Ranch.

After WWII, with the peacetime economy just beginning to start up, materials were still in short supply.  However the demand for housing was great, exacerbated by returning GI’s and their new families.  As a response to the situation, new homes like the WWII Era Cottage were built in large quantities.  Featuring little ornamentation, WWII Era Cottages are generally small (some less than 1,000 sq ft), and correspond to the small size of young families. Most were built by speculative builders and purchased by families who took advantage of a variety of government incentive programs which were offered through the Federal Housing Administration.  Because of their simplicity and low cost, WWII Era Cottages made the dream of home ownership possible for an unprecedented number of people. 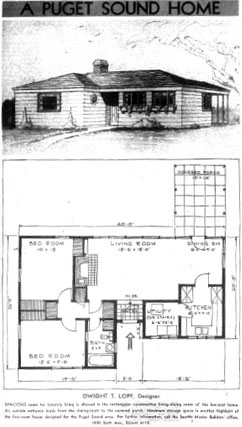 Sometimes referred to as “Roosevelt Cottages”, WWII Era Cottages are one-story structures covered by a hipped roof with minimal eave overhangs.  The overall shape is typically square or rectangular in plan, although many boast more complex footprints that incorporate attached garages and shallow room projections.  These projections can have hip or gable roofs. Large porches are generally absent; although a small covering or hood may be found over the front door, and/or a shallow stoop can be inserted into a projecting wing.  The exteriors of these wood-framed buildings are sheathed with a wide range of materials from horizontal wood siding, wood shingles, stucco or brick, to asbestos ceramic shingles.  Some concrete block and clay tile examples can be found. Higher end examples utilize a change in exterior material using the window sill as a breaking point.

WWII Era Cottages have a noticeable absence of stylistic ornamentation, hence often refered to as Minimal Traditional in style.  However, early examples often have Art Deco or Streamlined Moderne elements such as glass block and rounded porch features.  Wide frieze boards and vertical siding in gable ends might add a playful detail.  Towards the late 1940s, brick and stone became common as decorative accents, particularly in the form of water tables and raised flower planters.  Many have a single octagonal window on the main façade near the front entry door.  Other windows are tall and wide, many retaining just horizontal muntin bars.  Often windows are placed at the corners of the house and wrap around a side elevation.