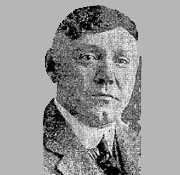 Seattle architect Edward Lovering Merritt was one of Washington State’s most prolific architects, yet he is barley known today.  His influence reached beyond Seattle and the Pacific Northwest and spanned the globe during the construction boom of the teens and twenties.

The son of a successful building contractor, Merritt was born in Northfield, Minnesota on October 31, 1881.  After graduating in 1900 from the University of Minnesota with a degree in architecture, he moved to Seattle to be with his parents and sister. 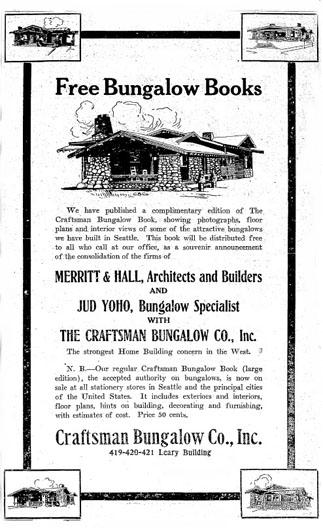 Upon his arrival, Edward initially took a job as a sign painter and then opened an automobile paint shop with his brother-in-law, Virgil Hall. Around 1908 they joined Merritt’s father, Charles, in the general contracting business operating under the name Merritt, Hall & Merritt (legally incorporated as the Merritt-Hall Building & Investment Co.). Charles was already a successful building contractor, and Edward had his architectural degree, but Hall had no prior building experience (he was formerly a noted bicycle and automobile racer).  Know projects by the firm are limited to the P.E. Wentworth House (918 E. Hamlin St., 1910); homes at 4410, 4414, 4418 and 4422 Latona Ave in the Wallingford neighborhood.

By 1911 Merritt’s father had retired and Edward and his brother-in-law decided to consolidate their business with Jud Yoho.  Together they became one of Seattle’s biggest promoters of the Arts & Crafts aesthetic and founded the Craftsman Bungalow Company.  Yoho initially served as President of the company, Merritt as Secretary and supervising architect, and Hall as Treasurer.

A Texas transplant of formidable promotional skills, his business partner Jud Yoho had arrived in Seattle in 1897. Like many builders of his day, he had previously played the role of developer, and designer as well as real estate agent, but he was not a trained architect.  Edward Merritt provided that cachet.  In 1912 they initiated an annual catalogue of perspective drawings and plans which sold for 50 cents.  Working drawings and specifications could be purchased for as low at $5.00 a set.

Coupled with Yoho’s marketing skills, Hall’s building expertise and Merrit’s design talents, they reportedly designed, financed and constructed hundreds of dwellings across the city.  Many were built in the Wallingford, Green Lake, University District, and Northgate areas of the city of Seattle.  Their reach however went beyond the city.  Later design books noted that homes from their plans could be found in every state of the Union, Alaska, Canada and Mexico, as well as China, Australia, France and England. Many local newspapers featured the designs of the Craftsman Bungalow Co. in their weekly home sections.  Examples can be found in Iowa, Kansas and Ohio.

Separately, Yoho had also established Bungalow Magazine, a publication of national circulation which promoted the Arts & Crafts aesthetic and domestic culture. By 1914 circulation had reached 40,000.  While the publication featured many of Merritt’s designs, there is no indication that Merritt participated in the magazine aspect of the business.

Some reports note that the Yoho, Merritt and Hall partnership dissolved in 1914, but advertisements show that at least Yoho and Merritt continued some type of partnership until at least 1922.  During that time Merritt continued to sporadically use the Craftsman Bungalow Co. name but increasingly he advertised just under his own name. 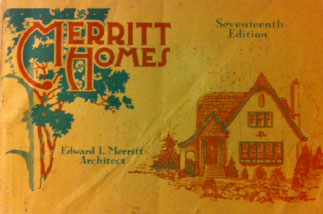 Afterwards Merritt continued an independent architectural practice and sustained a plan book service until at least 1925. He promoted his plan books widely with advertisements featured in a variety of national publications such as House & Garden and House Beautiful.

His reputation as an architect whom understood the construction industry, gained him a high level of respect in the local building community.  In the mid 1920s Merritt and a select group of builders refused to go along when most of their colleagues when the Seattle Builders Association agreed to be absorbed by the Association of General Contractors of America.  Unwilling to bow to any national group, he and a few like-minded contractors started a new association to represent the interests of Seattle’s community of builders.  At the first meeting of the Seattle Master Builders Association on April 17, 1924, Merritt was nominated as chairman.  He served two consecutive terms.

Over the course of his career Merritt was active in a variety of social organizations including the Elks and Masonic.  He was a Knight Templar Mason, a Noble Knight of Nile Temple, and a member of the Mystic Shrine.  He was active in architectural community in Seattle until the late 1930s. By 1942 he retired to the quite community of Allyn, Washington on the North Bay of Case Inlet.  He passed away there on August 10, 1950 at the age of 68.

Advertisement: “These Books Will Help You” – House Beautiful. April 1920.

“Distinctly Different is This Five-Room Colonial” – Seattle Times: May 22, 1922.

Advertisement: “As a Specialist in Home Building” – Seattle Times: February 11, 1924.