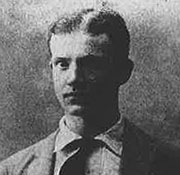 Architect Karl Gunnar Malmgren was born in Orebro, Sweden in 1862.  Reportedly he received his education in Europe including a period of study in Berlin.  Upon graduation he gained valuable practical experience while working for Swedish architect, P.L. Anderson for seven years. For reasons unknown, Malmgren migrated to the United States in 1888, initially moving to Seattle.  After meeting his future wife in Spokane, he moved to the city in 1889 and began working as a draftsman for the architectural firm of Cutter & Poetz.

Kirtland Cutter historian Henry Matthews notes that Malmgren was excellent draftsman and brought a new sense of professionalism to the office.  Matthews notes with his superior architectural education, interest in the decorative arts, and administrative skills, Malmgren could have easily challenged Poetz position as Cutter’s right-hand man.

Active in the local architectural community, Malmgren was instrumental in the establishment of the Spokane Society of Architects in 1899, serving on the executive committee.  He was also an enthusiastic member of the I.O.O.F. and the Elks, and supported a variety of Swedish organizations in the community.

Upon John Poetz's retirement in 1894, Malmgren became a full partner in the firm and the name was changed to Cutter & Malmgren (1894-1917). Together the architectural firm produced a dizzying array of buildings throughout the Pacific Northwest over a twenty plus year period.  Ranging in an eclectic mix of styles, the firm received many high profiles commissions from Spokane social and political elite including homes for Amasa Campbell (1897); Patrick Clark (1897); D.C. Corbin (1897); Jay P. Graves (1899); and Dr. Thomas (1907).

Other notable designs include the Washington Water Power Substation (1909); Davenport Hotel (1912); Spokane Club (1909); Crescent Store (1910); Monroe Street Bridge (1911); the Chronicle Building (1916); and the Idaho Building (1903) at the St. Louis Exhibition.  Most historians believe that Kirtland Cutter served as the main designer and delineator, while Malmgren flushed out the working drawings and oversaw construction aspects.  Malmgren only verified design is his own house at 709 W. Sumner Avenue in Spokane (1909).

Historian Henry Mathews suggest that Malmgren after thirty-two years may have left the firm over financial reasons in 1917.  At the high point, the office had ten draftsman but was reduced to just two by 1914.  After first opening an independent practice, Malmgren took on a partner, Charles I. Carpenter, around 1919. Both men received their architectural licenses that year; the year the state first began to award such licenses. After Malmgren died of throat cancer on May 21, 1921 at the age of 58, Carpenter continued an independent practice.